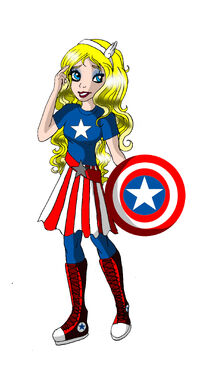 Like others heroes' kids, Columbia was forced into hiding (in S.H.I.E.L.D) between her four and six years due to the Dark Age of Lex Luthor's presidency. When it ended, Columbia returned to a seemingly normal life, even though the Super-Soldier Serum influenced her genetics and gave her superhumsn strength and speed. She had to wait to go Hero High to use them daily, and there a shield was made for her.

Of the stronger man on earth

Columbia's doll in her box
Add a photo to this gallery
Retrieved from "https://marvelcomicsfanon.fandom.com/wiki/Columbia_Rogers_(Earth-1616)?oldid=231053"
Community content is available under CC-BY-SA unless otherwise noted.