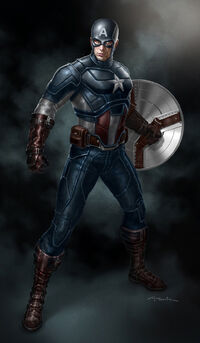 Cody Rogers was the son of former Avengers members Steve Rogers and Natalia Romanova. In 2025 after superheroes were deemed illegal, Steve and Natalia continued training Cody, so he would be prepared if superheroes came back into the world again.

In 2038 at age 18. After the young hero known as Spider-Man defied the law for a good cause. Others started to follow Spider-Man in his path for heroics and eventually Cody did the same becoming Captain America. A month after being Captain America, the new Mister Fantastic called upon Cody and offered him a new and improved suit, Cody agreed.

After his victorious defeat over Baron Zemo. Nick Fury approached Cody Rogers in an abandoned boxing arena and offered him a place on his new team The Ultras, Cody wanting to be so much like his father agreed to this.

Due to being born with the Super Soldier Serum, by the age of thirteen, Cody Rogers proved to surpass his father in every way possible.

Artificially Enhanced Physiology: Captain America frequently exhibits superhuman abilities as a result of the Super-Soldier serum. He is transformed from a frail young man into a "perfect" specimen of human development and conditioning (and likely into superhuman levels). Captain America is extremely intelligent, strong, fast, agile, and durable.

Master Martial Artist: Captain America he has mastered numerous martial arts like marine combat, muay-thai, boxing, judo and jiujitsu. He engages in a daily regimen of rigorous exercises (including aerobics, weight lifting, gymnastics, and simulated combat) to keep himself in peak condition.

Weapons Proficiency: He did not usually use weapons other than his shield, but unlike his Earth-616 counterpart, in desperate times or situations where he and teammates were outnumbered, he would wield additional weapons to ensure victory. He had used staffs, bludgeons, and was adept with swords [41]. He likely received training with different kinds of weapons during his wartime for undercover infiltration missions in the event of not being able to use his shield.

Master Acrobat: Rogers' years of training have made him an expert in the field of acrobatics and gymnastics as well as a stunning aerialist.

Indomitable Will: Rogers is a very strong willed person second to none. He was able to suppress all forms of temptation including physical, mental, and sexual. It was even noted in Dr. Erskine's log that the serum's success on Rogers may be attributed to "pure intent of the subject's will".

Expert Marksman: He could throw most if not all projectile weaponry with great aim and was well versed in the use of firearms his masterful sharpshooter sniper.

Master Tactician and Strategist: Captain America is "a tactical genius". He has been widely considered one of, if not the greatest, tacticians on the planet both on and off the battlefield. He's capable of formulating sufficient victory plans in "less than a second", and his brilliant tactical sense allows him to just as quickly alter any strategy of plan to fit the needs of the situation, one example of the latter is changing his World War II crew's pre-articulated plan within thirty seconds of drop-time after observing the approaching battlefield's variables, while commenting "the [original] plan had a hole the size of Iowa". These seem to verify Nick Fury's comment that Cap "learns new skills faster than a damn computer".

Master Shield Fighter: Captain America's years of training and experience with his unique shield, as well as its physical properties, allows him to accomplish mind-boggling feats with the item. Aside from bashing foes with it and blocking incoming attacks, Cap is able to throw the shield with nearly perfect aim. He is able to hit multiple targets with the same throw by means of ricochet, and can even achieve a boomerang-like return effect with it, allowing him to strike enemies from behind or retrieve the shield without objects to ricochet from.

Captain America's strength in the handbooks 7 tons maximum which would put him at superhuman.

Equipment: Captain America's suit is made of a Vibranium breast plate and bulletproof Kevlar. He additionally carries tactical devices and other items that a particular scenario may call for in his utility belt.
Transportation: None known.
Weapons: None known.

Retrieved from "https://marvelcomicsfanon.fandom.com/wiki/Cody_Rogers_(Earth-1315)?oldid=231052"
Community content is available under CC-BY-SA unless otherwise noted.