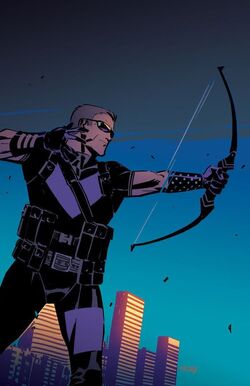 Clinton “Clint” Barton was born to Harold and Edith Barton. He grew up working in his father's Butchers shop in Waverly, Iowa with his brother, Barney. Their father was abusive, especially when he drank and continually beat the young boys; Barney taught Clint how to fight and helped him to improve his aim. Harold's drinking eventually cost him his life along with his wife when both died in a car accident. Clint and Barney were sent to numerous foster homes; while running away from one of them, they encountered and joined a traveling circus where the pair worked as roustabouts. While a member of the circus, Clint was trained by the original Swordsman and by Trick Shot, who were later revealed as criminals and international terrorists and black-marketers known to have been targeted by the Homeland Security.

Clint felt unappreciated and alone at the circus. His act, "The Amazing Hawkeye" got little attendance. Much to his dismay, his performance was ignored when people saw a Captain America documentary viewing outside a newly-established television store near the circus. After seeing the legendary Captain America in action on the television and learning the fact that he sacrificed his own life for the greater good of this country, Clint was inspired to use his archery skills to fight crime and even joined the Olympics for a while before deciding to join an extra-governmental military counter-terrorism and intelligence agency, know by the name of S.H.I.E.L.D., who was extremely impressed by his skills.

As he matured, Barton developed exceptional marksmanship skills and used them to great effect in the military arm of S.H.I.E.L.D., in which he was given the codename of Hawkeye, which was also his former stagename during his circus days. Around the time he joined S.H.I.E.L.D., he met and formed a romantic relationship with his fellow agent named Bobbi Morse who was also known by the codename of the Mockingbird, whom he later proposed to, despite the times that their different missions had caused them to be separated from time to time.

Later, he was tasked to carry out the assassination of a young Russian agent code named "Black Widow". However, instead of killing her, he opted to let her live, and discovered her true name, Natasha "Natalia" Romanova. The relationship between the two developed into a lasting partnership that continued through bringing her in to work for S.H.I.E.L.D. Together, they had missions in Budapest, Abidjan and many other locations.

Assigned by Director Nick Fury to watch over the Tesseract, he was brainwashed by Loki during the destruction of Project P.E.G.A.S.U.S. However, after the Attack on the Helicarrier, he was freed from Loki's mental control by Black Widow and joined the newly-established superhero team known as the Avengers, to fight off against Loki and the fleet of the Chitauri army in the Battle of New York, ending the Chitauri Invasion.

He then later continued to work for S.H.I.E.L.D. until its momentary collapse, after which he and the Avengers worked to try and bring down the remnants of the rising terrorist organization known as Hydra and the psychotic and megalomaniac artificial intelligence unintentionally created by their loyal and trustworthy teammate Henry Pym, the mighty and powerful Ultron.

Almost two months after the following events of the brief but brutal Ultron Offensive in the cities of New York and approximately three weeks before the Ultimate War, Clint and his now-fiancée Bobbi, decided to finally elope instead of getting married through a wedding, since they've realized that their lives gonna be full of "unexpected crap that's gonna come in their way," now that their ranks have been extremely increased as agents of S.H.I.E.L.D. since after all, they are now officially a married couple.

A few years later somewhere between the events after Civil War and before the Secret Invasion, the beloved couple eventually had conceived three lovely and wonderful children, the triplets whose named Cooper, Lewis, Nicole and their youngest, Francis, whom they had raised, alongside Barbara's mother, Susan Morse, in Clint's Homestead which was located in the rural community, where they could live off the grid to avoid disturbances, scandals, and controversies among the face of the public eye and most of the authorities. Despite this, Clint and Bobbi would still continue their careers, both as Hawkeye and as Mockingbird respectively and as agents of S.H.I.E.L.D. and members of the Avengers, keeping the country and the entire world safe from every possible threats coming upon their way, and their entire family, which would be the couple's greatest responsibility aside from being agents of peace.

As Hawkeye or Ronin, Clint possesses no superhuman abilities. Although, because of his abilities, Nick Fury's intel classified him as power level 8.

Retrieved from "https://marvelcomicsfanon.fandom.com/wiki/Clinton_Barton_(Earth-61615)?oldid=256614"
Community content is available under CC-BY-SA unless otherwise noted.