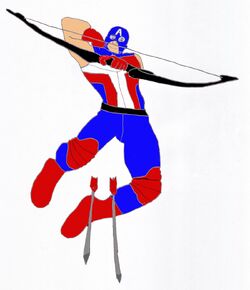 Married
Occupation
Adventurer, formerly thief, carnival performer
Origin
Origin
After leading a similar life to his primary counterpart, Clint took up the mantle of Captain America and his role as leader of the Avengers to fight Pym's horrific vision of reality.
Creators

It's an intense responsibility, Tony. You can't expect me to replace him. Even if I could be Cap, I can't be Steve. I wouldn't try to be him. As noble as he was, I'm still a thief at heart. ... But I'll do it. I owe him so much more. And if I fail, you kill me. Do I even be the archer anymore? That's me. So yes. I'll name my arrows after Avengers. And damn it, I'm never going to miss.

Clint's history remains unchanged from his Earth-616 counterpart up until the death of Captain America. Clint still tried on Cap's uniform and handled the shield. He proved adept in its usage, but refused the position. He later snuck back into Avengers Mansion to try out the shield, also adding his archery is with it. He then went to return the shield, only to be spotted by Iron Man. He tried to convince Clint that he was prepared, but Clint insisted he wasn't worthy. After talking himself into it, Clint agreed. He became the new Captain America.

Clint is an ordinary human, and he possesses no powers.

Retrieved from "https://marvelcomicsfanon.fandom.com/wiki/Clinton_Barton_(Earth-613)?oldid=177740"
Community content is available under CC-BY-SA unless otherwise noted.