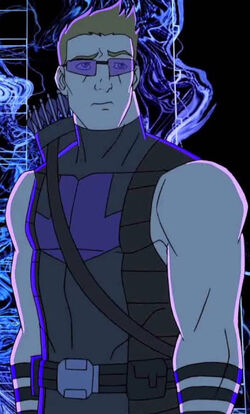 Clinton Francis "Clint" Barton is the son of Edith Barton, and he was born on April 8th. After eight years, Clint was kicked out of his house and left in an orphanage for ten years alongside his brother, Barney. That is, until he started getting trained by one of the world's best performers.

One night, Clint discovered that the whole time he was being trained, his mentor was secretly the criminal Swordsman. He told his brother the shocking truth and they both escaped from the circus.

After six years, he met biologist Bobbi Morse, who he fell in love with and married after five years. Later, he was contracted by Nick Fury to join the Avengers. He accepted the offer.

He trained Kate Bishop for a year, they fought crime together alongside his wife, who went by the alias Mockingbird.

Retrieved from "https://marvelcomicsfanon.fandom.com/wiki/Clinton_Barton_(Earth-609)?oldid=249392"
Community content is available under CC-BY-SA unless otherwise noted.