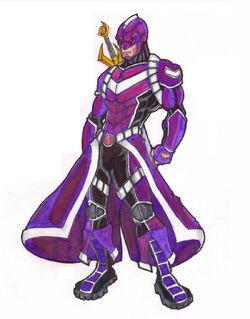 Unknown
Origin
Origin
Weapons masters who joined the Avengers to find himself.
Creators

I've been in many places. I'm known by many names. Now my talents are of use. I am a man of many talents, Swordsman, the Avenger.

Clint Barton was orphaned at a young age. He and his brother, Charles, fled to a traveling circus that they had seen through ads around their town. There, they were set up with the circus' sharpshooter known as Trickshot. Both of them excelled in archery, but Clint was better, so he began co-teaching under Swordsman and Trickshot, while his brother was left solely under Trickshot. Clint also excelled in swordsmanship, and soon became the show's star act under the names Archer and Sharpshot. Upon finding out that the circus was secretly a criminal ring, Clint fled with his brother, but not before Charles killed Trickshot and Swordsman in fear. From here, the brothers went separate ways.

Soon Clint was inspired to become a superhero when he saw the Avengers in action. Seeing people like Hank Pym, people who had powers through technology, inspired Clint to become a superhero. Inventing several trick arrows, and a vibrant purple costume, Hawkeye hit the superhero scene. But things did not work well for him, His trick arrows often misfired, and he was so inexperienced that other heroes soon saw him as a villain. Soon he got a love interest, the Black Widow, who soon had him committing actual crimes to benefit her agenda. When he realized what he was doing, he left Natasha and abandoned his identity as Hawkeye.

Still wanting to be a part of the scene, he took back his Hawkeye identity one last time, to steal his former mentor's sword. He broke into the stockhold where it was held, and began modifying it. He added many features to it, such as energy projectors and gas emitters. He fabricated a new costume and a new alias to rectify: Swordsman. Then he began doing what he did as Hawkeye: entering battles and helping the heroes. Soon the Avengers took notice, as he hoped, and asked him to join the team. He accepted, and despite his lack of powers, became a prominent Avenger in the public eye.

Weapons Expert: Swordsman is trained in handling most known weapons, and is an extremely skilled marksman.

Expert Combatant: Swordsman is trained in almost all forms of combat, and is a master of them all.

Peak Human Agility: Swordsman is a peak human, and is as agile as some Olympic athletes.

Equipment: None known.
Transportation: None known.
Weapons: Super-Sword: Swordsman carried a sword he modified himself with various gadgets. This sword could project concussive beams, flames, electric blasts, disintegration beams, and knockout gas. It was also highly durable and made of titanium.

Bow/Arrow: Swordsman formerly used a bow and many specialty arrows.

Retrieved from "https://marvelcomicsfanon.fandom.com/wiki/Clinton_Barton_(Earth-5)?oldid=244891"
Community content is available under CC-BY-SA unless otherwise noted.