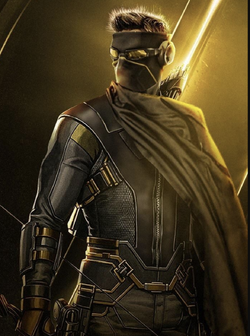 Ronin, The Hawk, Eagle-Eye, That Douche with the Bow and Arrow, The Man Who Kills Gods
Identity

I swear, one of these days I'll put an arrow through Apocalypse's eye socket. Then maybe I'll feel better.

Clint Barton was an agent of S.H.I.E.L.D., working alongside his girlfriend, the Black Widow to combat the forces of Apocalypse. After the fall of S.H.I.E.L.D., Black Widow was taken and placed in a human concentration camp. Hawkeye went off the grid to try and get his sister and nephew to safety, but it was fruitless. Hawkeye was hunted by the Horseman of Death, Archangel, who killed them both and severely damaged Hawkeye's hearing. However, he did manage to escape.

He would later rendezvous with other former S.H.I.E.L.D. Agents who had formed the resistance the Avengers, and eventually took the mantle of co-leader alongside Captain Canada, after they were forced to relocate to Department H in Toronto following Ultron's forces destroying the Man on the Wall Compound.

Hawkeye and the Avengers later joined forces with the reality hopping team the Outsiders. The teams worked together to bring down Ultron and Apocalypse, but in the ensuing battle, Hawkeye ended up sacrificing himself to stop Ultron from killing his teammates.

[[Category: In a Relationship with Natasha Romanoff Characters]]

Retrieved from "https://marvelcomicsfanon.fandom.com/wiki/Clint_Barton_(Earth-9999)?oldid=246143"
Community content is available under CC-BY-SA unless otherwise noted.