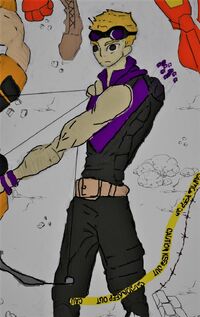 Single
Occupation
U.S. government super-operative, S.H.I.E.L.D. agent, former adventurer, hitman, conventional intelligence agent
Origin
Origin
Human; originally on death row after being convicted of murder, Hawkeye instead joined S.H.I.E.L.D.'s Black Ops for some time who would later quit due to a misunderstanding between him and Director Nick Fury. When he came back and became an Avenger, a background was altered for him, eliminating, among other things, his criminal record.
Place of Birth
Lawrence, Kansas
First appearance
Ultiverse Avengers #2

A former Olympic archer, Clint Barton was freed from death row and became a U.S. intelligence agent over a decade ago. He became a close friend and frequent colleague of fellow agent Nick Fury, and the two operatives were key founders of the modern intelligence agency S.H.I.E.L.D. Both rose through the ranks until Fury became the agency's director and Barton (code-named Hawkeye) became an elite agent of S.H.I.E.L.D.'s black ops division, often partnered with ex-terrorist assassin and soviet legend Natasha Romanoff (code-named Black Widow). Despite his dangerous, globe-spanning profession, Hawkeye left S.H.I.E.L.D. due to a misunderstanding between him and Director Nick Fury.

Years later, Clint was called back to SHIELD, warning him that that the entire planet was in danger and needed his skills and was told to meet the agents back at the Triskelion for more details. Soon after his deployment back, he was met up by his team including scientists Betty Ross and Bruce Banner, Hank Pym, Janet van Dyne, his partner Natasha Romanoff, Agent Coulson, Dr. Jane Foster, the reborn super soldier Captain America and Iron Man who had just arrived with Clint.

Fury then addressed the group saying they were part of Project: Avenger and under the command of Captain America. Then Iron Man walked into the room. Fury explained to them how a secret Hydra fortress off the coast of Norway was built to launch a gem-powered warhead in World War II. Fury showed them pictures that Rebel Ralston had taken. He told the group about how Cap had stopped the missile from reaching America. Betty asked how Hydra got the Infinity Gem's capabilities. Fury told them it was because of shape shifting aliens called the Skrulls. The Skrulls had been hiding out on Earth since World War II. Three ships have been hovering around nuclear power plants and military facilities. Fury went on to explain that the Skrulls failed to reclaim all the wreckage from the ship that was destroyed along with the early gem powered missile. Fury showed them a piece of the hull, made of metal they called Vibranium. The metal is indestructible and absorbs energy like a sponge. Fury warned that stopping this threat may not be easy but Cap and the rest of the group decided to continue including Clint himself.

"More to be Added"

Clint possesses no superhuman abilities. Although, because of his abilities, Nick Fury's intel classified him as power level 4 and reason why he was recruited for the Avengers team.

Barton possesses the normal human strength of a man of his age, height, and build who engages in intense regular exercise and is considered athletic.

As a child, abuse from his father left him partially deaf, but it's unknown if it was temporary or if it lasted until adulthood, with him successfully hiding it.

Hawkeye's ranged combat superiority is severely restricted by the limited supply of ammunition he can keep with him.

Equipment: He typically carries at least one custom bow and small arsenal of arrows- mostly conventional shafts and a number of trick arrows, utilized to perform specific tasks. Some are fitted with specialized tips. He sometimes employs special weapons, such as flamethrowers or Sniper Rifles. He also employs magnifying goggles.
Transportation: None known.
Weapons:

This version of the character is exclusive to the continuity of Marvel Ultiverse and is an adaptation of Clint Barton/Hawkeye. The original character was created by Stan Lee and Don Heck and first appeared in Tales of Suspense #57.

Retrieved from "https://marvelcomicsfanon.fandom.com/wiki/Clint_Barton_(Earth-981)?oldid=188381"
Community content is available under CC-BY-SA unless otherwise noted.