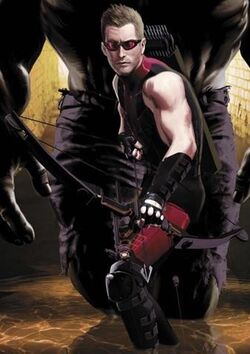 As a child Clint Barton took a interest in Archery. His parents paid for Private Archery lessons with Jacques Duquesne. Clint's Parents died in a Car Crash trying to pick him up one night in December. Clint and his brother Barney were put in a foster home which they both ran away from and joined the Circus.

Clint used his Bow and Arrow as his act while Barney discovered his ability with swords. Clint and Barney were all ways the last act because the two were a duo act. Clint would shoot three arrows at Barney who would split all three with his sword. When Clint was 16 he was approached by Daniel Redgrave who gave him the opportunity to join the Olympics.

Clint trained in Archery where he represented America.

Equipment: Trick Arrow Quiver: Hawkeye's quiver is supplied with a multitude of different arrow heads in the bottom. By dialing up an armament setting from a control on his bow, he can cause the quiver to affix these special arrowheads. This effectively increases the capabilities from conventional arrows, to explosive arrows, a grapple line, and more.
Transportation: Sky Cycles:
Weapons: Collapsible Recurve bow: The bow is capable of folding on itself (most likely for either easier transport, concealment, or both) that can be quickly snapped into its 'armed' form. It has a selector and transmitter that allows Hawkeye to control his mechanical quiver so that he can acquire certain arrows from it. It also has a laser sight.

Retrieved from "https://marvelcomicsfanon.fandom.com/wiki/Clint_Barton_(Earth-2226)?oldid=55875"
Community content is available under CC-BY-SA unless otherwise noted.