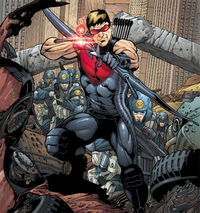 Earth-1315
Base Of Operations
The Triskelion
Characteristics
Gender

Clint was born somewhere in Texas to athletic parents, Clint was raised to be a fitness freak and he excelled in arching from a young age and so his parents focused him in arching. By the time Clint had reached adulthood, Clint was an archer in the Olympics and a good one too. Clint was eventually approached by S.H.I.E.L.D and they said they could use an agent with his skills, Clint agreed due to him thinking the Olympics were too "easy".

A few days after joining S.H.I.E.L.D, Clint met a woman by the name of Natalia Romanova a S.H.I.E.L.D agent who had also joined the same time as him, the two formed a brother/sister bond and went on many missions together, the two eventually received the codenames: Hawkeye and Black Widow which the two liked very much.

Reviving the Fallen Hero and battling the Hulk

In 2012, a year after joining S.H.I.E.L.D. Word went around that the Super Soldier known as Captain America had finally been found and that he had been revived by S.H.I.E.L.D. Clint was excited by this news since he grew up as a fan of Captain America although he wished not to "fan boy" out and ruin his S.H.I.E.L.D reputation. A few days later, Clint was called upon by S.H.I.E.L.D to accompany Steve and Natalia on a mission to stop a big green beast who was rampaging through Manhattan. After arriving in Manhattan, the three already saw Iron Man and Thor battling the beast now dubbed 'Hulk'. After hours of fighting the Hulk, they finally defeat him and see the Hulk was the renowned scientist known as Bruce Banner, they then took him into S.H.I.E.L.D custody.

One day the Triskelion was attacked by unknown superhumans claiming for the blood of their enemies. Steve suited up to battle these foes with Hulk, Steve and Natalia, while Fury contacted Iron Man and Thor. Clint helped Hulk battle Abomination although after the arrival of Thor and Iron Man, he went to help Thor defeat Loki. After hours of battling the Dark Avengers were eventually defeated and put into S.H.I.E.L.D custody.

Clinton Barton is a skilled marksman with an exceptional ability in archery. His aim is such that he is able to send an arrow into a moving targets with pin point accuracy, and he has even shot an enemy warrior off a fast moving vehicle while looking the other way. He is also a competent martial artist, and fights with a style that occasionally employs his bow as a melee weapon in addition to his more conventional attacks.

Hawkeye's ranged combat superiority is severely restricted by the limited supply of ammunition he can keep with him.

Equipment: Trick arrow quiver: Hawkeye's quiver is supplied with a multitude of different arrow heads in the bottom. By dialing up an armament setting from a control on his bow, he can cause the quiver to affix these special arrowheads. This effectively increases the capabilities from conventional arrows, to explosive arrows, a grapple line, and more.
Transportation: None known.
Weapons: Collapsible Recurve bow: The bow is capable of folding on itself (most likely for either easier transport, concealment, or both) that can be quickly snapped into its 'armed' form. It has a selector and transmitter that allows Hawkeye to control his mechanical quiver so that he can acquire certain arrows from it. It also has a laser sight.

Retrieved from "https://marvelcomicsfanon.fandom.com/wiki/Clint_Barton_(Earth-1315)?oldid=161701"
Community content is available under CC-BY-SA unless otherwise noted.