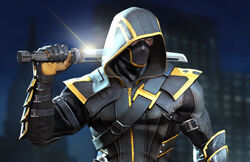 Earth-1212
Base Of Operations
The Nexus
Characteristics
Gender

Clint Barton was once considered to be one of the deadliest men on Earth, and sold his talents to the highest bidder under the moniker of Hawkeye. He was eventually tracked down by Nick Fury, the Director of S.H.I.E.L.D., who offered him a job with the agency. Clint accepted the offer and began working side by side with a fellow former assassin named Wolverine.

After they succeeded in killing the Silver Samurai and toppling the family, Clint and Mariko kissed, proceeding to fall in love. Eventually, Clint decided to settle down and leave S.H.I.E.L.D. to have a family with Mariko in Japan. He initially thought he might be bored with the domestic life, but after having two children, he found he had never been happier. However, it wasn't long until Hydra revealed itself to have been embedded within S.H.I.E.L.D., emerging and attempting to make their play to conquer the world.

Reluctantly, Clint agreed to take up the mantle of Hawkeye once more to fight off Hydra alongside Fury. However, he quickly discovered that Wolverine had agreed to change sides and fight for Hydra, and used his newfound power to take vengeance on Clint. While he and Fury were distracted fighting Hydra, Wolverine struck against Mariko and their children, violently murdering them and leaving a calling card for Clint so that they could finally settle things.

When he discovered that his family had been murdered, Clint became enraged and struck out to fight Wolverine, and kill him. Fury urged Clint to rethink this course of action, as Wolverine was considered to be unkillable, but Clint did not care. He remembered a few years ago while he and Logan were drunk, he told him the tale of the Muramasa Blade, an ancient Adamantium sword capable of killing Wolverine.

Clint eventually discovers that the Blade was in possession of the ancient ninja cult, the Hand. He decided to infiltrate their headquarters and steal it, only to find himself locked in combat with the Hand's two best assassins, Elektra and Nobu. He was able to hold his own for a long time, but eventually succumbed to both of their swords plunging into his chest. However, he then found himself waking up in the Hand's monastery, discovering they had utilized black magic to revive his soul and revitalize his body.

It was then that Elektra offered the Muramasa Blade to Clint, informing him that the Hand wanted Wolverine dead too, and believed Clint was the one to do it. He accepted, and fashioned himself after an ancient Japanese warrior called the Ronin. He then set out to track down Wolverine, who had been covering his tracks ever since a team of superheroes had banded together to fight off Hydra. But for the Ronin, finding Wolverine was his sole purpose. He eventually found him hiding out at an old safehouse in the Canadian Rockies. After sneaking into the safehouse, Ronin discovered he wasn't there, and decided to wait for him at the kitchen table, drinking Wolverine's last bottle of Scotch.

Eventually, Wolverine arrived and calmly sat across from Ronin. The two reminisced about old times and lamented the way things used to be, before having a conversation about how much they both loved Mariko. But then, Ronin told him about how he cradled the dead body of his wife and children, how he buried them, and how he cried for them. Wolverine then claimed that killing Mariko was the hardest thing he'd ever had to do, but was cut off by Ronin slashing him across the face. As he fell to the ground, Ronin informed him that surviving the coming battle will be the hardest thing he's ever done.

They fought long and hard, each getting in several fatal blows. After having Wolverine sink his claws into the same place Elektra and Nobu had stabbed him, he swung the Muramasa Blade and decapitated Wolverine. As his head hit the snow, Ronin collapsed and closed his eyes, finally ready to be reunited with his family.

However, when he opened his eyes, he was not in the Rockies, nor was he dead. He had been plucked from his reality and miraculously healed in the Nexus. He looked around and found himself surrounded by alternate versions of Captain America, Iron Man, Black Widow, Thor, and the Hulk. They were approached by the multiversal being the Silver Sentry, who informed each of them that their time in their home realities was over, and now it was their responsibility to right wrongs across the multiverse. Ronin initially believed that this was just some post-death hallucination, and only agreed to join after being told the probability of each of them dying was incredibly high.

However, after countless bloody missions, Ronin found himself still not dead. Eventually, the Captain, Iron Man, Thor, and Hulk all fell to the various circumstances of the mission, leaving only Ronin and Black Widow and their new teammates, Goliath, Blade, Ghost Rider, and the Thing. Ronin and Black Widow found themselves forming a connection, as they had both had unique relationships with the alternate versions of each other, and agreed to look out for each other on their missions so that eventually, they might be able to have a happy ending. This was the first time Clint started to feel like he might have a purpose beyond the family he had lost, but those hopes were shattered after the Black Widow took a bullet directly to the brain shot by an alternate version of the Punisher. As he catches her falling body, he has a flashback to the first time he held Mariko's body. Enraged, he charges at the Punisher with the intent to kill him, but as it was not a part of their mission, the team was swept up as his sword was inches away from Punisher's neck.

The burden of the Tallus was then passed on to Ronin, and from then on he dedicated himself solely to the mission, hoping that eventually he might meet a foe capable of finally giving him the sweet release of death. However, something about Ronin consistently kept him from getting killed, and was eventually relieved from the team by the Sentry and returned to his universe. Feeling purposeless, but unwilling to kill himself, he decided to exact justice on everyone else who had wronged him in his world. He started by assassinating both Elektra and Nobu, taking control over the Hand and converting the organization into a stealthy peacekeeping force dedicated to assassinating targets of interest across the world.

However, this eventually attracted the attention of Nick Fury, who had long since believed Clint to be dead. After a brief confrontation between S.H.I.E.L.D. and the Hand, Ronin decided to relinquish control of the Hand to Fury, converting it into a legitimate organization. He then decided it was finally time to retire, and started to set up a home for himself in a small Japanese village.

Unfortunately for Clint, mere hours after he settled into his home, he was swept back up into the Nexus. He then discovered that the Silver Sentry had been killed by the combined forces of Team X and the Squadron Supreme. Since then, the two teams had begun operating side by side out of the Nexus, and that Clint's old teammate that he once had a rivalry with, Vers, had decided to recruit him back in order to take leadership of the team away from the Human Torch. Ronin was willing to rejoin the team, simply due to having nothing left for him in his home reality, but refused to be the leader once more. Instead, he handed over the Tallus to Vers, allowing her to take control of the team.

Retrieved from "https://marvelcomicsfanon.fandom.com/wiki/Clint_Barton_(Earth-1212)?oldid=251928"
Community content is available under CC-BY-SA unless otherwise noted.