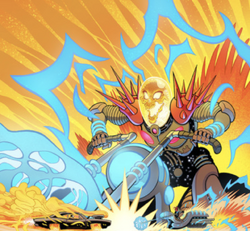 Earth-101
Base Of Operations
The Nexus
Characteristics
Gender

I knew I should've shot that damn baby in the face when I had the chance.

During his days on Earth, Clint Barton was a dedicated and valued member of the Avengers. He fought bravely alongside his fellow teammates against Thanos and the Black Order, but ultimately failed to save his planet. He and his wife, the Black Widow, were some of the only humans who managed to make it off the planet in time.

Humanity had begun attempting to recolonize on Mars, using Shi'ar technology to build a hospitable environment for themselves. Clint and Natasha were even able to use Shi'ar technology to help the previously infertile Black Widow become pregnant. They went on to have three children, Grant, Makayla, and Phillip. Trying to form something of a normal life, they tried to move on from their past failures.

But the past is inescapable. As Thanos continued his trail of destruction across the galaxy, more and more civilizations were destroyed, including the Badoon, an alien species the Avengers had gone up against before. A large squadron of surviving Badoon soldiers ended up ransacking Mars, almost completely wiping out humanity, including Clint's wife and children.

Enraged and hopeless, Clint wished he had a way to take revenge. It was then that he was approached by the spirit of Mephisto, who offered to imbue Clint with the power of the Ghost Rider, and unleash him loose on the galaxy. Clint accepted the offer and commandeered a Badoon space cruiser to launch into the stars. However, he didn't make it very far until he encountered Galactus, while he was attempting to devour the planet of Zenn-La, due to the death of his previous herald, the Silver Surfer, negating his deal not to destroy his planet.

Ghost Rider attempted to fight him off, but was no match for the cosmic power of Galactus. Eventually, he took inspiration from the Silver Surfer and offered his services to become Galactus's new Herald, so long as he leaves Zenn-La alone. Reluctantly, Galactus agreed and Clint then became empowered with the Power Cosmic. He began using his new position as the Herald of Galactus to lead the world devourer on a path straight to Titan II, the home of the Mad Titan.

Eventually, Galactus caught on to the game Clint was playing, and agreed that Thanos needed to be eliminated. Together, the two of them mounted an assault on Titan II, and Galactus was slain by the all-powerful Thanos. Clint believed that this was the end, and he was finally going to be reunited with his family, but was instead offered a chance to live by Thanos. He had grown bored and needed new worlds to pillage so that he could succeed in his ultimate goal of wiping out all life in the universe, and tasked the Ghost Rider with becoming his new Herald.

However, Clint said he would rather die. This resulted in Thanos using the power of all six Infinity Stones to torture Clint for about fifty years, always managing to keep him just on the brink of death, but not quite. Eventually, Clint submitted and began working as Thanos's new Herald, eventually losing his sense of self.

When the past versions of Captain America, Iron Man, and Thor were thrust into the future and returned to their time with knowledge of Thanos's victory, he became worried his ultimate triumph would be undone. Using the Time Stone, Thanos sent the Ghost Rider after the Avengers, tasking him with assisting his past self in claiming all six Infinity Stones.

Since beginning to lead the charge to help Thanos find the Infinity Stones, he has had multiple encounters with his past self, and the younger Black Widow. Seeing her face started to jog Clint's memory about why he was doing what he was doing, but his resolve had been broken long ago. He believed Thanos was too powerful to rebel against, and that he didn't have a choice. However, with each passing event that the Avengers managed to change or alter in a way not foretold by the Prophecy of Infinity, the Cosmic Ghost Rider started to believe that if he was able to help them somehow, without blowing his cover in the Black Order, he could erase his timeline from existence.

Eventually, Thanos fell to the combined might of the heroes of the universe. However, the Cosmic Ghost Rider did not fade from existence, instead he remained as a time paradox, quickly being removed from his reality by a being called the Silver Sentry. The Sentry decided to make use of the Cosmic Ghost Rider's unique position in the multiverse by placing him on his new Team X alongside various versions of Captain America, Valeria Richards, Yelena Belova, Colossus, and Rocket Raccoon to replace the old team.

Clint decided to go along with the Team, figuring he has nothing better to do, and nowhere else to go. However, the team would eventually discover that the Silver Sentry had been manipulating them, and Clint was enraged. He didn't like being manipulated. After Ghost Rider and his team freed the previous Team X from stasis, they all banded together to take on the Sentry, and Ghost Rider's Power Cosmic was what helped turn the tide against him. From there, he decided to remain with the team once they gained control over the Nexus.

The Cosmic Ghost Rider then proceeded to go on several missions alongside the revamped Team X, but grew bored with his free time in between missions. It was then that he truly began to consider his own existence. He didn't believe it was possible for him to die, but he also wasn't sure what it was he was living for. He began using the Nexus's database to search through the vast multiverse, and eventually discovered a reality where Thanos had never come to Earth, and his alternate self had settled down with the Black Widow, having children who turned out to be exact alternate versions of Grant, Makayla, and Phillip. Unfortunately, that Hawkeye had perished in a mission fighting Hydra, which prompted the Black Widow to retire to focus on her family.

Clint finally thought he had found a purpose for himself. After a brief and vague conversation with the Scarlet Witch, he made use of the Nexus's inter-dimensional transporter and beamed himself to Earth-104. He powered down and made contact with the Black Widow, claiming to be Clint Barton's absentee father, Frank Barton. The Black Widow saw right through his ruse, and demanded the truth out of him. Reluctantly, he told her everything, and how he had hoped to come to this reality to restore a sense of purpose with his family. Heartbroken and touched by his story, Natasha agreed to let him pose as her children's grandfather so that he could become a part of their lives. Finally, he found the happiness he had been searching for all those decades as the Ghost Rider.

Retrieved from "https://marvelcomicsfanon.fandom.com/wiki/Clint_Barton_(Earth-101.1)?oldid=251731"
Community content is available under CC-BY-SA unless otherwise noted.