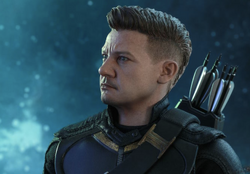 So I'm on a team with a gamma monster and a Norse God, and we're up against an alien overlord who hates life... trying to change the future. And I have a bow and arrow. Did I miss anything?

Clint Barton is the oldest of the three Barton siblings, and he was always the most dutiful. His younger brother, Barney, was always a miscreant and a delinquent, and Clint never really got along with him. However, he was very over protective of his little sister, Laura, who was maybe the sweetest person he had ever known, aside from his mother. She always protected her children from their drunken, abusive father. Until one day, the two of them died in a car crash, that Clint always suspected was his father's fault for being drunk.

For the next few years, Clint raised his sister while Barney ran away to live on his own. Clint eventually took up archery to relieve his stress, and found that he was a natural. Even when he tried, Clint could not miss. Over time, his talent began to gain attention, and was being courted by Olympic coaches.

But Clint wanted to do more with his life. He had been slighted in life, and he wanted to be able to give back for other people. It seemed his desires came to fruition in the form of Nick Fury, who had become fascinated with the attention Clint was getting. Fury offered him a position within the secret agency S.H.I.E.L.D., where Clint could make a real difference.

Clint was hesitant to leave his sister, but by this time she was already attending college, and she assured him she could take care of herself. He then accepted Fury's offer and quickly became one of his most trusted lieutenants, and was eventually selected to become a special ops agent under the codename "Hawkeye". Clint decided to use this opportunity to reincorporate his archery skills into his life, making the bow and arrow his primary weapon.

For the next few years, Hawkeye acted on his own until he was sent after the Russian assassin, the Black Widow. After he tracked her down and engaged her in battle, he felt like her heart wasn't really in it. He then laid down his bow and offered to help her, which she initially didn't believe. However, after he convinced her he meant her no harm, he brought her back to meet Fury, who offered her a place in S.H.I.E.L.D. as well.

Black Widow accepted the offer so long as she would be working alongside with Hawkeye. For the next few years, they worked side by side in tandem, eventually falling in love, leaving their connection unspoken, but equally understood. Fury came to trust them both enough that when the time came to form the Avengers, he recruited both of them.

After the Avengers defeated Loki and his Chitauri army, they decided to remain together as a team. When the time came to leave S.H.I.E.L.D., Hawkeye was reluctant, but knew it was the right thing to do if he really wanted to keep making a difference with the team. He was even able to convince Natasha that leaving S.H.I.E.L.D. was what was best for them. They have since become some of the Avengers's most premiere members, and fall more and more in love every day.

[[Category: In a Relationship with Natasha Romanoff Characters]]

Retrieved from "https://marvelcomicsfanon.fandom.com/wiki/Clint_Barton_(Earth-101)?oldid=250540"
Community content is available under CC-BY-SA unless otherwise noted.