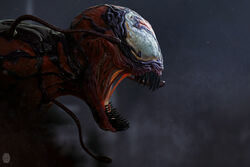 Cletus Kasady has been insane from the day he was born. At the age of 9, he killed his grandmother by pushing her down the stairs. By 22, he was a nationally famous serial killer being hunted by the police. He would later spend time as cellmates with Eddie Brock, who was broken out by his alien symbiote. In the ensuing mess, Cletus discovered the symbiote left behind its offspring.

After the two bonded, Cletus drove the symbiote insane and they became Carnage, one of Spider-Man's worst enemies. By the time Apocalypse rose to power, Carnage was forcibly recruited into his Armada.

Apocalypse came to appreciate the madness Carnage brought to the world, and domesticated him into becoming his personal attack dog.

Retrieved from "https://marvelcomicsfanon.fandom.com/wiki/Cletus_Kasady_(Earth-9999)?oldid=245208"
Community content is available under CC-BY-SA unless otherwise noted.