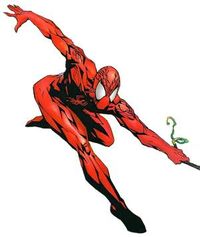 American
Occupation
Agent, Assassin (Formerly)
Origin
Origin
Cletus Kasady was an assassin for Hydra who was born with Borderline personality disorder. After 3 months of service, Cletus was released from Hydra for being inconsistent with work. After receiving medical treatment, Cletus came into contact with the Carnage symbiote. Cletus was capable of controlling the violent symbiote and he now "has control over it". In the Marvel Earth-200 reboot, Cletus is one of the five characters using the mantle of Spider-man and is currently a member of the antihero-like team known as the EliteWatch!
Creators

After several months have passed since he permanently bonded with the Carnage symbiote, Cletus was slowly becoming a wandering assassin with no purpose. Cletus crossed paths with Cable who was at the time looking for "special recruits" for his new team. Cable knew Cletus was perfect for his morality-questioning team.

Retrieved from "https://marvelcomicsfanon.fandom.com/wiki/Cletus_Kasady_(Earth-200)?oldid=201592"
Community content is available under CC-BY-SA unless otherwise noted.