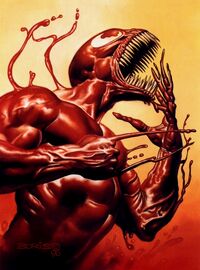 Wow. I never thought I failed at my own goal. If I can't make this whole God-forsaken city red, then I'LL MAKE YOU BOTH RED!

Cletus Cassidy was born to an unknown mother and father. His childhood was murderous, as he killed his grandmother and attempted to kill his mother. This resulted in him being sent to a mental institution before being sent to a catholic orphanage; this only made things worse, as many of the kids and teachers would abuse him due to his mental instability and murderous tendencies. This caused him to kill the children and teachers in the orphanage, and then burn the orphanage down.

After multiple confrontations with Spider-Man and Venom, he had enough, and decided to sneak into a military base that recently found another type of symbiote. Once he managed to find the base and kill all the soldiers, he managed to take the symbiote and found a way to clone the symbiotes, and learned it to take up a more soldier-esque appearance and physique like Venom. Afterwards, Carnage and many of the symbiotes attacked New York, which caused S.H.I.E.L.D. and the United States Military to be involved, as well as Spider-Man and Venom.

Once S.H.E.L.D and the United States liberated New York from the symbiotes, Spider-Man and Venom managed to fight and weaken Carnage inside a construction zone. In a last-ditch effort, he decided to take an explosive and started charging after Venom and Spider-Man. However, Venom managed to take a metal bar and hit Carnage, causing him to fall and explode while falling, killing Carnage for good and ending the war.

Retrieved from "https://marvelcomicsfanon.fandom.com/wiki/Cletus_Cassidy_(Earth-7777)?oldid=248509"
Community content is available under CC-BY-SA unless otherwise noted.