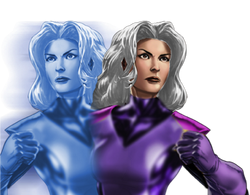 White
Unusual Features
While she ruled the Dark Dimension, the Flames of Regency appeared on Clea's head.
Status
Citizenship

Clea was born of an affair between Prince Orini, legitimate heir to the rule of the Dark Dimension, and Umar, sister to the then-current ruler Dormammu. Umar became disgusted by her relationship with Orini, and abandoned Clea to be raised by him. Prince Orini kept secret any and all knowledge of Clea's true origins.

Dormammu had long sought to conquer Earth and, as a result, often confronted Earth’s defender, Doctor Strange. When Doctor Strange journeyed into the Dark Dimension to continue his battle against Dormammu, Clea first sought to dissuade Strange from facing Dormammu. Dormammu imprisoned her for betraying him to Strange. During the Duel between Strange and Dormammu, the latter's powers were drawn away from keeping the Mindless Ones in check. Strange aided Dormammu in driving the creatures back, and in return was honor-bound by Strange to release Clea and not invade the Earth-dimension.

Clea aided him again in a confrontation with Dormammu, and the two fell in love soon after. On subsequent battles, Clea continued to help Doctor Strange, and their infatuation grew. Umar first gained control of the Dark Dimension when Dormammu was trapped in a pocket dimension after a battle with Doctor Strange and Eternity itself. Seeking revenge against Strange, Umar used Clea as a hostage. Doctor Strange rescued her, but his mentor the Ancient One convinced him that Clea would only be safe if she were sent to another pocket dimension. The couple agreed, even though they believed they might never see each other again. However, the dimension proved to be the same one that Dormammu was exiled to. Dormammu began to set plans in motion for his escape, but Doctor Strange thwarted his plans and rescued Clea in the process.

Doctor Strange returned to Earth with Clea, and she lived with him in his Sanctum Santorum, becoming his lover and disciple. Over the years, she grew in her mystical potential and became nearly his equal in mystical aptitude. She joined him on many of his adventures, such as defeating Dormammu from invading Earth on several occasions.

Eventually, Clea left Earth to return to the Dark Dimension, in part because she believed that Doctor Strange’s heart belonged to Morgana Blessing. Umar had once again seized the throne from Dormammu, who was believed dead when his essence was scattered across several dimensions. Clea was determined to help the forces of rebellion in their attempt to overthrow her. Clea and Doctor Strange sought out Prince Orini, the true heir to the original ruler, Olnar, and Strange learned the truth of Clea’s birthright. Clea and Umar battled one-on-one, with Clea emerging triumphant and claiming rulership of the Dark Dimension. Umar and Orini, who remained loyal to her, were exiled to a pocket dimension.

When Dormammu reappeared, he won control over the Dark Dimension once again, forcing Clea to return to Earth once more. However, she grew uncomfortable in their relationship. Stronger and more capable, she no longer needing Doctor Strange as a mentor, and their relationship suffered. Clea returned to the Dark Dimension and her role as leader of the resistance against him and his sister.

Known Powers:
Sorcery: Clea has become the Sorceress Supreme of the Dark Dimension, possessing vast magical powers. She has exhibited such abilities as forming and throwing magical bolts of energy, conjuring objects and energies, teleporting, telekinesis, controlling others’ minds, and casting illusions. Presumably, she is capable of replicating any spell performed by her former mentor, Doctor Strange.

Clea can tap into various mystical forces by petitioning other-dimensional entities for aid, relying on her own mystic talents, and manipulating various mystic forces of both the Marvel Universe and the Dark Dimension.

Clea is half-Faltinian and half Dark Dimension mortal, and can naturally fly and hover. Before coming to know Doctor Stephen Strange, Clea was only acquainted with the mystic forces in minor ways, but her potential increased as her training increased. Her powers increase and decrease based on her peace with herself, her energy levels, her current condition, and her connection to her environment. Clea's mystic powers were greatest when she wore the Flames of Regency, the sign of the true ruler of the Dark Dimension which is reinforced by the denizens of the Dark Dimension believing in their ruler and weakens when that belief does so. Clea's powers have at times been shown to be greater in the Dark Dimension than they are on Earth.

Clea can exit her body in her astral form and travel outside it at the speed of thought. She can communicate with others telepathically, most notably to Doctor Strange due to their close bond. Clea can plant telepathic suggestions in the minds of others (at times briefly hypnotizing them), alter the memories of others, sense the psychic auras of others, determine when others are lying, see the astral forms of others, create psyche-spheres to block the telepathy of others, and astrally channel good spirits for limited astral effects. Clea can also project her mind or body through the timestream. Clea can combine her mind with Doctor Strange and others in order to increase mystic talent, and can extend force spheres from there. Clea is also a talented hypnotist. By casting a certain spell, Clea can awaken memories in the ego of another, allowing them to visualize events that they have not experienced, or creating illusions of others' memories in that person's mind; this spell can also awaken events from the past, however.

Clea can utilize weaver magic to disguise or reform her clothing or the clothing of others. As well, Clea can mystically transform her body and the body of others. Clea has transformed a man into a pig and guns into snakes. Clea has also conjured a rabbit, a leopard, an octopus, and a mystic warrior seemingly from thin air.

Clea can cast various spells due to her own mystic potential, including a spell of silence, the conjuring of mystic bolts, the masking of death, temporally banish others, project seismic bolts, form light-formed bindings, form a fire shield, cast an invisibility spell, reverse the effects of advanced aging, conjure a mystic force field, use telekinesis, generate frozen hail, generate a rain of flame, manipulate metal, translate other languages through an incantation, retard the progress of advancing flames, fire mystic flares, transfer magic power from one being to another, and cast a spell of protection to limit the ability of others to attack her.

Clea can, to a limited extent, teleport herself and others to various locations and other dimensions, including the astral plane (to which she can travel physically). Clea has been shown to travel from Earth to the Dark Dimension and back rather easily at times, but has had challenges doing so at other times, depending, likely, on various mystical principles. Clea once cast a sympathy spell, drawing upon the power of multiple psyches and powering them with love. Clea can channel pagan magic rituals and entreat earth spirits such as Gaea for aid. Certain demons are naturally resistant to Clea's powers.

By petitioning extra-dimensional forces and entities, Clea can utilize various spells for specific effect. These spells have included the Light of Nirvalon, the Shield of the Seraphim, the Rings of Raggadorr, the Chains of Krakkan, the Fangs of Farallah, the Vipers of Valtorr, the Winds of Watoomb, the Flames of the Faltine, the Cage of Dyzakk, and the Bolts of Bedevilment. Clea has even called upon the Vishanti to interrupt the intense meditation of Doctor Strange.

Clea has, at times, used mystic artifacts for various effects. She can manipulate Doctor Strange's Cloak of Levitation, Eye of Agamotto (indicating her purity of heart), Orb of Agamotto, and Purple Gem. Clea once used a heartstone, that allowed her to remain on Earth from the Dark Dimension while it was white and automatically pulling her back to the Dark Dimension when it turned dark. Clea has used mystic telling stones, allowing her to project messages and images to others. Clea was briefly possessed by an extradimensional energy that changed her into an energy form filled with hate.

As she is descended from the Faltine race of beings, it is suggested that can generate her own mystical energy like Umar and Dormammu and draw upon it to fuel her magic. Clea possesses tremendous magical power as a member of the Faltine race, although she is less experienced than the others.

Enhanced Strength: She also possesses greater strength than that of a normal Earth human.

Enhanced Durability: She possesses greater body density than that of a normal Earth human.

Longevity: Her age is indeterminate, having lived for centuries but having the form and demeanor of a twenty year-old woman, and the rate at which she ages is unknown.

Flames of Faltine: Can innately control the powerful Flames of Faltine, raising her already formidable magical abilities to even higher levels capable of defeating the Asgardian goddess Enchantress in single magical combat, and at the peak of her magical abilities even rivals her mother Umar and Doctor Strange himself in raw power. However, Dormammu has become Lord of the Dark Dimension once again, having regained the Flames. The Flames are claimed to be capable of effortlessly destroying any undead who threatened their bearer.

Clea has been trained in basic forms of martial arts and other mental disciplines by Strange.

Clea's magic has been shown to wane in other dimensions, such as that of Earth's, and certain creatures appear naturally resilient to them.

Retrieved from "https://marvelcomicsfanon.fandom.com/wiki/Clea_(Earth-1010)?oldid=187950"
Community content is available under CC-BY-SA unless otherwise noted.