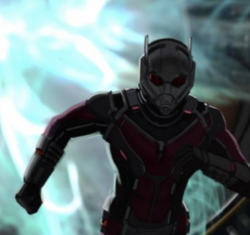 Earth-8008
Base Of Operations
The Outside
Characteristics
Gender

Clay Barton joined the Navy after graduating High School, and was on track to become a Navy SEAL before an honorable discharge after his leg was injured. Depressed and hopeless, Clay turned to alcohol and was eventually arrested for assault during a bar fight. He would become cell mates with Scott Lang, and eventually got out early for good behavior and tried to find a job as a security guard. When no place was hiring, he was eventually given a chance by Hank Pym, who was secretly the Avenger known as Ant-Man. Clay became close with Hank and his assistant, Janet van Dyne, who was also an Avenger known as Wasp. Tragedy struck when Hank was killed in battle against the Serpent Society, and Janet begged him to take up the mantle of Ant-Man to honor Hank. Seeing this as a true opportunity for redemption, Clay accepted and was welcomed into the Avengers as the new Ant-Man. He and Janet would eventually fall in love and become engaged.

Clay was recruited into the Outsiders under the promise that if he returned to his home reality, he would misuse the Ant-Man suit in an attempt to save the other Avengers and end up trapped in the Quantum Realm forever.

Ant-Man went on to become a premiere member of the Outsiders and formed close relationships with his teammates. After they gained control of the Palace, he used the transporter to go back to his world and see Janet once more to explain where he's been before returning to active duty in the Multiverse.

Eventually, The Outsider decided he was wasting resources by having two teams, so he sent the Outsiders and the Renegades to Earth-9, a world where all of humanity had been wiped out by war, to battle it out and have the winners form the one true team. Ant-Man met his end in this battle at the hands of Captain America, who beat him to near death before decapitating him with his shield.

Super strong while in small or giant form

Retrieved from "https://marvelcomicsfanon.fandom.com/wiki/Clayton_Barton_(Earth-8008)?oldid=244487"
Community content is available under CC-BY-SA unless otherwise noted.