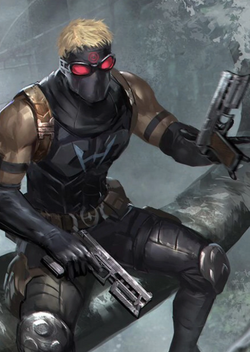 Look, I do my job, and I do it well. Probably better than any of you, so why don't we all just listen to the professional and we'll be home in no time.

Clay Barton became an agent of S.H.I.E.L.D. right out of High School. He quickly worked his way up and became a special agent code named Hawkeye. It wouldn't be long before he married his partner, Mockingbird. But things took a turn when Clay was forced to kill his brother, Barney after he took his girlfriend hostage. This sent Clay into a deep depression, so he turned to alcohol. His increasingly erratic behavior drove Mockingbird to leave him, only making him even more bitter.

Hawkeye would be recruited into the Outsiders under the promise that one day his drunkenness on a mission would result in the deaths of several civilians. He didn't believe this for a second, but played along and attempted to assume command of the Outsiders. His attitude instantly made the others dislike him, so much so to the point that they complained to The Outsider to the point that he gave in and sent Hawkeye home, instead recruiting Ant-Man in his place.

Retrieved from "https://marvelcomicsfanon.fandom.com/wiki/Clayton_Barton_(Earth-8007)?oldid=245805"
Community content is available under CC-BY-SA unless otherwise noted.