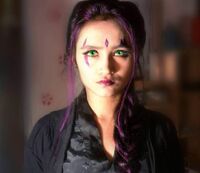 Mutant Clarice Fong originally associated with X-Men allies the Morlocks, but is now an X-Man in her own right and Jubilee's best friend.

Blink is a mutant.

Displacement Field Gars: Clarice is capable of manifesting the energy for her portals in the form of short energy-matter javelins, which she can throw at an object causing it to teleport, either partially or fully to different areas. She uses this ability both offensively and defensively; she can open blink holes to divert attacks or as makeshift way-point markers for matter substitution and teleport beacons, she can send multiple targets to multiple locations at once using them.

If a target can hyper-accelerate their molecular vibrations, Blink's warping pikes can't dislocate them from their adjacent space.

Equipment: None known.
Transportation: X-Jet
Weapons: Blink wielded javelins to make better use of her powers. They were carried in a quiver worn on her back.