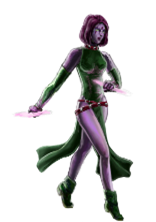 Clarice Ferguson was a mutant born in Mojoverse, taken as a slave by Mojo and employed as a mercenary.

Blink is a mutant:

Skilled Leader: Clarice has shown great skill in leadership, having lead the Exiles for quite some time as well as training new teams of heroes.

If a target can hyper-accelerate their molecular vibrations Blinks warping pikes can't dislocate them from their adjacent space.

Equipment: None known.
Transportation: Blink's powers were used as her transportation.
Weapons: Blink wielded javelins to make better use of her powers. They were carried in a quiver worn on her back.

Retrieved from "https://marvelcomicsfanon.fandom.com/wiki/Clarice_Ferguson_(Mojoverse)_(Earth-1010)?oldid=184204"
Community content is available under CC-BY-SA unless otherwise noted.