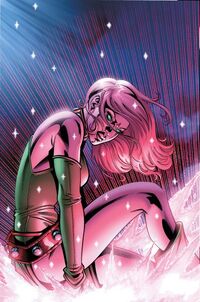 Blink was one of many young mutants captured by the Phalanx to assimilate their powers. Blink was frightened of her powers because she could not properly control them, and apparently was unable to teleport anything in an intact form. Instead, any object or person caught in Blink's teleportation field, also known as a "blink wave", would be shredded.

She later used her abilities to "cut-up" Harvest, a Phalanx entity guarding her and her peers, but apparently was caught in her own teleportation field and died in the process. Because of her sacrifice, the remaining captives were set free and became the X-Men junior team Generation X.

Unknown to others in this reality, Blink wasn't killed by her teleportation field because of the intervention of her ancestor Frederick Slade. He used his teleportation field to save her, and the Harvest by accident. Once they arrived in the Clan Akkaba base, the Clan then killed the Harvest. They then kept her there for her own "good". Frederick Slade then bonded with Clarice. He became a father figure to her. Through his training, she learned fine control over her powers. She was saved by the X-Men in the Clan Akkaba story-line. Blink eventually married Cannonball, whom she had a son with.

Clarice has the same powers as her Earth-295 counterpart.

Retrieved from "https://marvelcomicsfanon.fandom.com/wiki/Clarice_Ferguson_(Earth-1992)?oldid=155624"
Community content is available under CC-BY-SA unless otherwise noted.