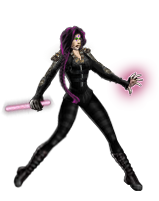 Blink was born a mutant, gifted with the power to create small spacial warps in her near vicinity. She was part of a small group of Free Mutants who were remnants of the X-Men and their allies, fighting a bitter losing war against the Sentinels.

Blink provided tactical support for the group, using her spacial warps to control the flow of battle by teleporting her allies and and interfering with the attacks of her aggressors.

Teleportation: Blink possesses the ability to generate teleportation warps, allowing her to displace people and objects. Her effective range is to the moon and back. Also, Blink can manifest the energy for her portals in the form of short javelins, which causes their targets to teleport. She uses this power offensively and defensively.

Retrieved from "https://marvelcomicsfanon.fandom.com/wiki/Clarice_Ferguson_(Earth-1010)?oldid=185629"
Community content is available under CC-BY-SA unless otherwise noted.