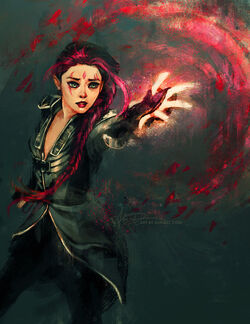 Where are we going? I can get us there in the blink of an eye.

Clarice Ferguson's mutant powers manifested when she was 13-years-old, and used them to escape from her dull life in Beijing, traveling the world. Her travels eventually led her straight to Apocalypse, who recruited her to become the Horseman of Pestilence.

She then began working alongside the other Horsemen, Death, War, and the one she became closest with, Famine. After X-Force and the Brotherhood defeated Apocalypse, Clarice was taken under the wing of the former Horseman of Famine, Sabretooth, who brought her back to Genosha.

She went on to join the Brotherhood of Mutants and was given the mutant name Blink. She was happy to be among fellow mutants, but wasn't very fond of the violent lifestyle she had been led into. That is why she mostly relegated herself to providing transportation for the other Brotherhood members unless absolutely necessary for her to get involved.

Retrieved from "https://marvelcomicsfanon.fandom.com/wiki/Clarice_Ferguson_(Earth-101)?oldid=249041"
Community content is available under CC-BY-SA unless otherwise noted.