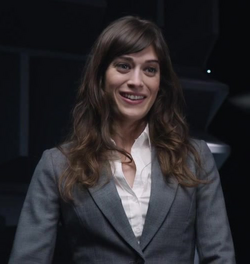 Claire Wise is a former bank robber and agent of S.H.I.E.L.D. as well as her boyfriend Benny Pollack.

They were inducted to the organization by Agent Jasper Sitwell, after they caught the Agent's attention by using a Chitauri weapon, which they found in the aftermath of the battle for New York and managed to reactivate by themselves, to commit their crimes. Claire was assigned as Agent Felix Blake's assistant, but he was at a lost at how to use her.

Claire's name, along the name of her boyfriend (Benny), is an homage to the infamous robbers Bonnie and Clyde.

Retrieved from "https://marvelcomicsfanon.fandom.com/wiki/Claire_Wise_(Earth-1010)?oldid=161096"
Community content is available under CC-BY-SA unless otherwise noted.