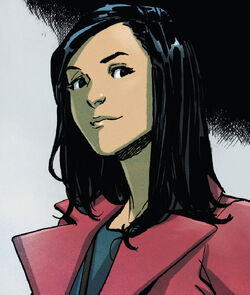 Who am I? I'm the Amazing Silkworm, doofus!

Cindy Moon was born in the early 2000s at New York City to couple Albert and Nari Moon, who were Korean immigrants in th United States between the mid to late 90s. Growing up, she becomes a high school student at the Brooklyn Visions Academy after passing its supposedly "extremely difficult" entrance test, wherein she's currently a member of the academy's varsity team, although she was also a former member of the school's decathlon team. Within the academy, she eventually becomes a good friend of Miles Morales, but (surprisingly) not Mile's future best friend Ganke Lee, by the time they first met in seventh grade as classmates. As a member of the decathlon team, Cindy attended during several practices, but ended up getting bored and tired of it, feeling like she had no place within the team, despite being encouraged by her peers and parents that her gifted intelligence would've helped her improve her social circle, much to her dismay for their stereotypical mentality, thinking that her intelligence solely defines her personality.

During the chaotic events of the Ultimate War, Cindy and her family's home were devastated as the diabolical forces of the Movement Alliance spread death and destruction throughout New York City, forcing them to fled to the nearest evacuation center, found within the nearest subway station. Due to some unfortunate circumstances, the portion of the subway wherein Cindy's family were hiding for the next few weeks was inevitably discovered and infiltrated by mob enforcers, a situation which led to Cindy's mother, who was pregnant with Cindy's unborn brother, being injured after they tried to escape their threatening grasps. Thankfully, Cindy and her family were rescued by the web-slinger Spider-Man, who gave way to a team of volunteer medics from Metro-General Hospital which eventually treated Cindy's injured mother. From that moment on, the heroic actions of Spider-Man, especially the words of wisdom he invoked to Cindy, was the final inspiration in motivating her to give her attempts of joining the school varsity a shot as a part of her new future goal of becoming a civil servant to help others who are in need, the same actions Spider-Man is doing in his friendly-neighborhood. At some point later on two weeks after Ultimate War, she finally got accepted to join the academy's varsity, wherein she would become a star player, mainly for the school's volleyball team, earning herself the popular nickname, the Amazing Silkworm, an athletic nickname that Cindy admired most of the time, although she didn't deny that it was slightly racist due to her Asian heritage.

Retrieved from "https://marvelcomicsfanon.fandom.com/wiki/Cindy_Moon_(Earth-61615)?oldid=241572"
Community content is available under CC-BY-SA unless otherwise noted.