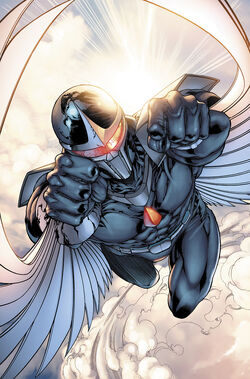 So you wanna kick some ass or let me take all the fun?

Darkhawk, AKA Christopher Powell is a vigilante and superhero who wields the Darkhawk Armor, a piece of equipment made by the Shi'ar out of both magic and tech. With the armor, Chris fights criminals from ordinary muggers to supervillains both solo or with other heroes.

Chris' life is similar to that of his primary counterpart, but with some differences. In this reality, Chris was never a member of the Secret Defenders since Doctor Strange never made any other Defender teams aside from the original one. He also witnessed the decimation of Stamford by Nitro that triggered the Civil War. Thanks to his suit, he survived the blast and mourned for all the losses of that day.

Class 25+. Initially, Powell could only lift up to two tons. But training and further upgrades allow him to achieve the strength level he has now.

Technically none. Magic and tech attacks with the purpose of disabling the armor can affect it to an extent, however.

Transportation: His armor's flight ability.
Weapons: The Darkhawk's own armaments.

Retrieved from "https://marvelcomicsfanon.fandom.com/wiki/Christopher_Powell_(Earth-5000)?oldid=215541"
Community content is available under CC-BY-SA unless otherwise noted.