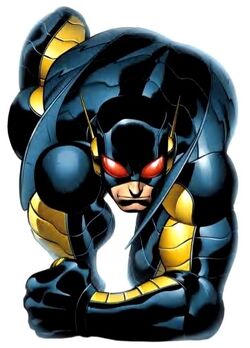 All I know is one thing's for sure, Hydra will rise...

Christopher Nicholson was a Hydra infiltrator in S.H.I.E.L.D. disguised as a level 8 agent. Trained by the superiors, (including his parents who were also Hydra operatives) to become a cold-blooded killer and mercenary, he was more and more loyal to HYDRA overtime. During the Chitauri Invasion, both of his parents were killed when an explosion had occurred in their apartment. As an agent of S.H.I.E.L.D., he was recruited onto Agent Coulson's team and became one of it's best agents for years. At one point after Pym ended his Yellowjacket ego, S.H.I.E.L.D. assigned Chris to take on it's mantle by getting him injected with the latest version of the Pym Particles.

After a few training controlling and retaining his powers under Phil Coulson's training and Hank Pym's teachings, he became the next Yellowjacket, though in all of his occasions he refused participating with the Avengers and remained to be loyal to S.H.I.E.L.D. itself, believing that they still cannot be trusted after the events of his parents' deaths. He prefer being the lone wolf of S.H.I.E.L.D. than becoming an Avenger.

Even before the following events of Ultimate War, Chris became one of the elite secret operatives who participated in Hydra's black-ops mission during the Hydra Uprising. Though most of his subordinates was exposed disguising as S.H.I.E.L.D. agents, Chris still remained pretending and even killed one of his allies just to prove his "loyalty" to S.H.I.E.L.D., and let the rest to get arrested. Chris kept his secrets unrevealed to his own "team." After the conflict gets apparently resolved, it was later shown to have access on a secret compartment on the Playground where he kept on sending recent S.H.I.E.L.D. information, classified or non-classified, preparing for their next step on attack, the Nimrod Invasion, as a preparation for the actual main event weeks from now, the Movement Alliance.

During the starting events of Ultimate War, Chris activated the sequence that led to the activation of several explosions across several structures all over the world that was secretly supervised by S.H.I.E.L.D. and the World Security Council. After being sent to infiltrate an active Hydra headquarter with Phil Coulson's team, he finally showed his true colors and intentions, revealing that he was in fact, a Hydra loyalist after all. He and his back-up team killed all of his former teammates, leaving only Phil and the originals to be trapped in the facility. They managed to escape right after Phil and Melinda May saw that Baron Heinrich Zemo was revealed to be actually the Red Skull, who survived the aftermath of World War II.

Fortunately, Chris luckily survived the massive explosion on the main headquarters, caused by Hydra and S.H.I.E.L.D. infiltrator known as Mark Gruler that occurred during the last moments of the war itself, defeating Hydra and stopping it's domination goals once more. Chris kept on hiding until he decided to rejoin S.H.I.E.L.D. one more time by using another fellow deceased agent's identity by using his identity and a Photostatic Veil to use his face, during Civil War.

During the Superhuman Registration Act, Nicholson pretended to side with Coulson's Team who believed against the registration as a spy for the new S.H.I.E.L.D. director Maria Hill's faction, so they can apprehend Coulson on the inside. Nicholson was eventually caught by May who didn't fully trust him at first. Chris had later reintroduced himself to the rest, revealing that he truly survived after the events of Ultimate War. After the arrival of Chris' back-up, Coulson and the rest tried to convince that the spy they were trusting was the same Chris who was a Hydra operative, though in the end they thought they were insane and didn't believe them. Chris was still successful and called on Hill's black-ops team, who arrested Phil and the rest of them.

During the final battle of Civil War between both factions, Chris became the Yellowjacket once more, the only thing he didn't realized is that it was his last time. After growing up to 20 meters tall, he went into bloodlust and killed a lot of S.H.I.E.L.D. agents, including his own allies. After that, all of the remaining S.H.I.E.L.D.'s forces from both factions fired their weapons at Chris, damaging his Photostatic Veil, revealing his true face. He was finally defeated after getting knocked out by the enlarged sizes of Scott Lang, Hank Pym, and Eric O'Grady, restoring him to his normal size.

He seemed to have fully unconscious after getting knocked down by the three giants, he somehow manages to slowly wake up in his normal size and used his last remaining bullet and pistol inside his pocket, shooting Alphonso Mackenzie from behind, critically injuring him. Before he could even killed Mack, he mocked Chris, telling him that he was just like Grant Ward, only a lot more lamer. Chris responded by saying the only difference between him and Ward was he was still standing and Ward isn't, and before he could ever pull the trigger on Mack's head, he was shot repeatedly in the chest from behind straight into his heart, by Phil and May.

Phil responded that he wasn't (standing) now as he quickly falls down into the ground, seemingly dead from his injuries. They both helped Mack and was rescued by their allies, Anti-Registration faction and escaped the scenario. Chris' corpse was the only "operative" who was later burned by Maria Hill while the rest had a proper funeral and burial, since he was a heartless traitor and said that he deserved to burn in hell for what he did.

Retrieved from "https://marvelcomicsfanon.fandom.com/wiki/Christopher_Nicholson_(Earth-61615)?oldid=268049"
Community content is available under CC-BY-SA unless otherwise noted.