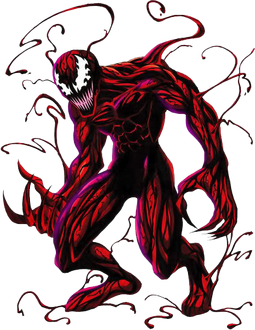 Single
Occupation
Vigilante, Former Library Employee
Origin
Origin
A former library worker bonded with a symbiote that was from the Carnage symbiote.
Creators

Christopher Michael Thompson was born to Margret and Allan Thompson. Some point during his infant years, he was adopted by Mary San and was raised.

During this time, he met J. Osborne, who he befriended over time. He then met Abbie Ryans and Veronica Wells. One day, his family had to evacuate from his town as the military declared that "an unknown phenomenon has occurred".

Years later, he managed to come back to his hometown, once there, he started an job at the library as an employee where his adoptive mom worked at.

One day, he left a party that his friend, J was hosting. However, he came across a vile that contained a red substance. Before he could investigate a military man attempted to shoot him but he later broke his knee, arm and fractured his skull. This also caused the red substance to break lose and consume him.

After last night, he wakes up to his room with a bandage over his head. This is when Christopher finds out that he's been bonded with the symbiote. During this time, he finds out more of his powers when he was walking to a abandoned warehouse, he witnessed a unnamed gang attacking someone through a alley way. The gang noticed him and attempted to attack but the symbiote managed to guide him to safety and fight off the attackers before saving the man and moving on his way. Afterwards, he tries out his powers before swing away like a familiar superhero. Later at night, he witnesses two men robbing a convenient store, they were both dispatched and later apprehended the men. This was witnessed by Betty Brant's daughter, Katrina Brant and was followed by her. However, after confronting her about this, she was taken back to his place and explained who the Life Foundation is. Katrina then asks him to look out on the street for crime, causing him to fight off bank robbers.

Days later, he was getting ready for a upcoming party involving the anniversary of the Library. After making it to the party, the Life Foundation busted in, resulted in Mary and Eric dying and Christopher captured.

Unlike the usual hosts, both Wrath and Christopher show the same views on life. Such as them not wanting to kill unless as an last resort or in self-defense. They both are harmless when it comes to crime. However, when organizations that will harm anyone anyway, they both eliminate them in order to stop them from.

They both see life as something that needs to be sacred but also takes in consideration that he'll only kill if the criminal is an danger and won't stop, in self-defense and in a last resort.

Carnage Clone Symbiote: After being attached to the symbiote, he could transform into his suit stage, where he has the same appearance as Carnage's symbiote. He also possessed the same powers as the symbiote with some extra powers and some differences.

Unlike the original Carnage, this Carnage symbiote is about to pick up 500 to 1,000 tons, however this can be a disadvantage as picking up something 1,000 tons would at least take about 2 or less minutes.

Retrieved from "https://marvelcomicsfanon.fandom.com/wiki/Christopher_Michael_Thompson_(Earth-7777)?oldid=231050"
Community content is available under CC-BY-SA unless otherwise noted.