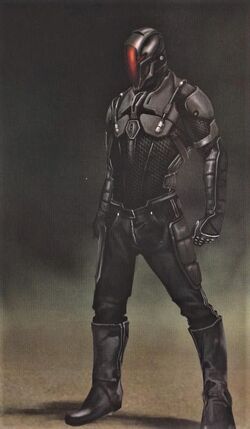 Earth-61615
Base Of Operations
Mobile on a S.H.I.E.L.D. Helicarrier
Characteristics
Gender

For the first time in my life, I get to be someone else, but a lot f*cking better... You ever get that kind of feeling?

Christopher "Chris" McCarthy was initially a low level S.H.I.E.L.D. agent working in the reconnaissance department on a Helicarrier, though he later got the chance to register and prove himself into eventually be promoted as a higher, more average-level agent, thanks to the outstanding grades he received in his combat training sessions and field performances, which impressed even the likes of Agent (later director) Coulson, Agent May, and frequent Deputy Director Hill. In terms of relationship-wise, not only did this help him gain more friends into his espionage social circle including his best (and childhood) friend Eric O'Grady, but his impressions of improvement also gave him a chance to hit it it off with a fellow agent named Victoria King, whom the latter had grown a liking to Chris before he did. However, despite getting all the attention he had hoped for, he never expected that his career would give him more and more responsibilities as an agent, failing to realize Director Nick Fury's words of advice: "the better the rank, the heavier the responsibilities," much to his annoyance that nothing ever comes easy.

On a night of his duty in the Helicarrier, Chris was meant to inspect the laboratory of Hank Pym, only for his impatience and laziness get the worst of him by assigning an agent that he literally just found nearby him. Ordering a lower ranking agent to do the very task he was meant to do, Chris was careless enough to not realize what he has done, letting a Hydra undercover agent infiltrate the laboratory of one that belonged to one of the greatest minds on Earth, thereby taking some samples of the Pym Particles because of Chris' ignorance. When McCarthy realized his failure, Eric panicked and tried to handle the situation on his own terms before anyone else in the agency would've find out about it. Inside the now infested lab, Chris discovered one of the most many recent versions of Ant-Man Suit, which Chris put on and easily activated, shrinking down, in pursuit of chasing down the Hydra agent and prevent him from escaping the Helicarrier before it's too late.

Around this moment, a group of Hydra operatives have attacked the ship as a way to wreak havoc and distract the while their undercover agent makes his way out of the Helicarrier, and Chris was caught up in the ensuing chaos, with only his best friend O'Grady being one of the last surviving agents within the ship. With the two being S.H.I.E.L.D.'s last hope in stopping Hydra claim more Pym Particles, they teamed up to find the tracks of the agent using surveillance, until they finally get to confront him outside of the Helicarrier. The two tried their best to put the Hydra agent down, but the agent had his back-up in time which unfortunately overwhelmed Eric. Chris, wearing the Ant Man Suit, almost gave his best using the Pym Particles against the agents but he was too inexperienced. The suit malfunctioned, and Chris was also beaten into a pulp along with his best friend. Thankfully for the two, a back-up troop of S.H.I.E.L.D. agents, which included Hank Pym in his traditional Ant-Man suit, who rescued the surviving agents and finally took down the Hydra faction due to their strength in numbers, imprisoning their infiltrators afterwards. When the chaos was declared over, Chris and Eric was treated and recovered from their injuries before they were put into interrogation by their superiors.

During the interrogation, Eric tried to save Chris' by holding himself responsible for what letting the agent inside Pym's lab, as he has always done for him as they grew up, but Chris had enough of his best friend's heroism by admitting his crucial mistake. The superiors were obviously disappointed in him his irresponsibility, placing him into several exhausting sessions and community services as his punishment before he could get back into his regular duties, which he he complied due to his guilt and willingness to change for the better. Unbeknownst to Chris, Pym and were both interested in both him and for Eric their heroic attributes, planning to give the agents a surprise weeks later on. Calling Chris and Eric to meet him at his lab once again, the two best friends were surprised that Pym had given them new modified Ant Man suits of his design, allowing them to use the suits when during a serious and heavy mission. In response to Pym's gift, Chris and Eric couldn't be more thankful for the original Ant-Man's blessing.

The Movement Alliance conducted a series of massive terrorist attacks all over the world destroying the Brooklyn Bridge, Golden Gate Bridge, Eiffel Tower, Taj Mahal, and even the Great Wall of China, killing over 1,500 people on the very first day. Consequently, all the Movement's opposing adversaries, the heroes, were united into creating their own Ultimate Alliance, in order to stop and prevent the Movement from commencing its schemes upon world domination and unified evil sovereignty, before its too late.

As the attacks all over the world have continued for days and then weeks, more and more casualties are sadly, starting to increase in numbers, due to the extreme acts of terrorism and serious devastation, continuously committed by the conflict between the Movement Alliance and its seemingly unstoppable forces against the combined forces heroes and anti-heroes of the world, the Ultimate Alliance, who are not stopping their fight against the villains until they find a way to make them pay for their irreversible actions and restore back peace in the entire world. Thus, in the wake of this impactful response to battle the diabolical forces of the Movement the Ultimate War suddenly sparked across threatened nations and slowly began worldwide. Joining his fellow agents at S.H.I.E.L.D. to participate on the war, specifically allying himself within the league of Ant-Man, Chris finally got the chance to put on the size-altering suit that was personally made for him, showing his heroic identity to the world as the Black Ant.

Later on during the non-stop skirmish on New York, the Yellowjacket Darren Cross led his Yellowjacket army in order to decimate all of the defensive forces from the U.S. Army, the New York City Police Department, and many more in order to infiltrate to the secured evacuated areas. Unluckily enough, the authorities started to become defenseless overtime, and eventually they had no other choice but to retreat back as they tried protecting all the civilians, having the Yellowjackets' power extremely surpassed and destroyed most of their defenses effortlessly, like they were nothing. When Cross and his men were prepared to massacre the entire place, a hooded man from the crowd suddenly stood up, revealed to be Hank Pym. Seeing Hank Pym, Cross slowly walks towards him and taunted him what kind of heist he was planning at the time. Smiling at Cross' specific question, Pym told him that the heist they were working on this time was for stopping whatever his scheme was once more, followed by Pym giving Cross a hard fist to the face for the second time. Cross tried to grab his throat, but Pym suddenly shrinks down, revealing that he has finally returned into taking on the mantle of the Ant-Man.

As the result of his return, Cross shrank himself and the two finally engaged in a duel. While fighting Pym in a level match, Cross then called and ordered his men to keep surrounding the place and proceed to killing the civilians, only for their plan to be immediately foiled by another three men from the crowd, revealing themselves as the other Ant-Men: Scott Lang, Eric O'Grady, and Chris. The three battled the rest of the Yellowjackets, resulting in their eventual victory, freeing all the evacuees inside the area to safety, before proceeding to help a weakened Pym against Cross, who was close to getting killed by the villain. As the four Ant-Men engaged in a final duel against Cross outside the city, which was also currently a final battleground between the Movement Alliance and the Ultimates, the heroic four neared towards defeating the villain, right until Cross unexpectedly took the battle towards a higher level and activated all of his suit's full capabilities, continuously releasing an unstable energy pulse from his suit's stingers, giving him the upper advantage against the Ant-Men.

Having no other choice but to go full subatomic, McCarthy unthinkably tried to shrink his suit, only to be stopped by Pym and Lang, explaining that he couldn't survive without the proper suit needed to enter the Quantum Realm. McCarthy, who was still hesitating on whether he would truly go subatomic or not, was unluckily shot by Cross' stingers in a split-second, hitting him straight in his heart, fatally injuring him. McCarthy's teammate and best friend, O'Grady, immediately out of sheer panic and concern for his dying friend, went to him. As McCarthy slowly died in his arms, O'Grady greatly mourned for the death of his teammate and closest friend. Despite his short-lived journey as the Black Ant, Chris nevertheless died a true hero whose sacrifice is certainly something that his teammates, who was practically his family, will not forget.

Size Manipulation: With the Pym Particles, Chris can reduce his size down to less than one inch tall and increase his size above normal, approximately sixty-five feet tall and above.

Retrieved from "https://marvelcomicsfanon.fandom.com/wiki/Christopher_McCarthy_(Earth-61615)?oldid=265398"
Community content is available under CC-BY-SA unless otherwise noted.