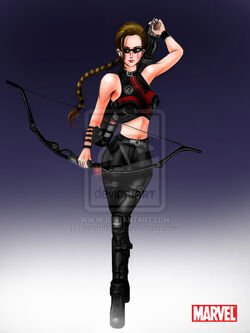 My father always says that you must keep your eyes on the prize, and that's exactly what I always do.

Christina was born in Cleveland, Ohio; as the only child of Shelley Barton, housewife, and Clint Barton, United States Senator. Christina always developed a passion for sports, and also was known in her school for her heart of gold, always helping with social work and volunteering after school hours. Her family always encouraged her to follow her dreams and her passion, which after a few tries in some sports, finally stayed into archery, which was something she always excelled at

At the age of 15, she literally had won every single national archery competition, which caught the eye of the U.S. Olympic Team who recruited her so she could compete on a higher level. After four years of training and competing on an international level, Christina competed at the London Summer Olympics where she scored perfect results on every attempt and won the Gold Medal. However, not everything was bright and happy within the team. One of her teammates, Bronze medalist Johanna Morse, was envy of Christina's success and influence, so in a sudden fit of rage during a team celebration party, she poured hot coffee into her eyes, hurting her sight and rendering her blind. The doctors said that her sight can be regained but at a very slow rate and might not even be as perfect as before. Both Christina and her father Clint took the news very hard, which led Christina into a hard depression

Clint wanted to have his daughter happy again, so he managed to move all of his political influences to gain medical permission to perform a high risk eye surgery on his daughter so she can regain her sight, but he also used his influences to activate a special procedure that enhanced her sight up to a 300% of its original state, making her sight even better than before. Two days after the procedure, Christina returned to her life with the archery team and spending time with her family happier than ever, but she was amazed at how her improved sight helps her to perfect aim and accuracy, executing perfect shots with her bow and arrows. Her father knew about these developments, but decided to keep the special features of the procedure a secret so he won't harm her

Christina returned to the Olympic team, aiming to recover the lost time and train for the next international competition, finding out that Johanna was expelled from the team after her assault and she found new teammates as well, but she still felt uneasy about her improved aiming. After she returned home from a practice, she accidentally stumbled upon a conversation between her father and members of a group called Spectre. They claim that he received financing from their group to perform undisclosed projects, including a top-secret eye surgery, making Christina realize that her enhanced surgery came from them. The fear grew when she heard her father refusing to accept their demands and they responded with death threats, even bringing hidden weapons to coerce Barton into complying. Christina held on her bow and burst into the room to save her father. The thugs were physically superior, but Christina's superb aiming was more than enough to subdue the criminals long enough for the security team to arrive. After the ordeal, she confronted her father about the surgery. Clint claimed that he only did it because she knows how much she loves archery and wanted to make her happy, but she felt bad that her father hid that to her. After the argument, she left home, even resigning to the Olympic team in order to avoid any suspicions should the aspects of the surgery come to light.

A New Direction in Life

Without any direction in her life, she felt depressed about the situation, and more importantly, angry at her father for hiding the aspects of the surgery. During a walk on the streets of Cleveland, she bumped into a robbery in a grocery store. The gang of thieves was heavily armed, but Christina improvised a bow and a few broomsticks as arrows in order to stop the assault. The leader however, managed to escape, taking a young girl as hostage and Christina went in pursuit. She eventually managed to corner him into an alley, aiming straight at his head while he was threatening to kill the girl until she backed down. She indeed walk two steps back, out of her usual shooting range, but thanks to her uncanny aiming, she eventually shot her last broomstick into the thief, knocking him down. The police arrived and arrested the gang, while the hostages thanked Christina's intervention, even one of them approaching to her to reveal that the girl she saved was his daughter, and that he would feel miserable should anything happened to her. That comment made her realize that she was hard to her father so she returned home to apologize. After a heartfelt reunion, Christina confessed to her father that she felt so good after saving that people that she wants to become more active in that role. Her father knew that she was bent into becoming a heroine, but once again, all he wants is to make his daughter truly happy so he agrees to help her and this time he'll use the proper contacts

That contact came in the form of one of Clint's old high school friends, who turned out to be S.H.I.E.L.D. Director Phil Coulson. Phil listened to Clint's plea and even concurred with Steve Rogers] about her situation. Seeing Christina's potential, he agreed to let her become a member of the Avengers, with the condition that she must receive proper combat training with the best instructor, to which Coulson agrees, since the best instructor there is is Steve himself.

Christina's eye surgery increased her marksmanship to an unheard of level of accuracy. Among these enhancements, the "cones" and "rods" in her eyes (the specialized cells responsible for normal human vision) had been manipulated. While a normal human has up to 150 million rod cells in their retinas, Hawkeye has closer to 400 million, vastly increasing her visual acuity.

Hawkeye is able to fire six arrows faster than the average human can fire six bullets. Hawkeye is a master archer with extraordinarily fast reflexes, exceptional dexterity, and near-perfect aim. She also has an uncanny knack for using miscellaneous hand-held objects as projectile weapons.

Equipment: None known.
Transportation: None known.
Weapons: She typically carries at least one custom bow and small arsenal of arrows- mostly conventional shafts, but some fitted with specialized tips.

Retrieved from "https://marvelcomicsfanon.fandom.com/wiki/Christina_Barton_(Earth-120986)?oldid=271431"
Community content is available under CC-BY-SA unless otherwise noted.