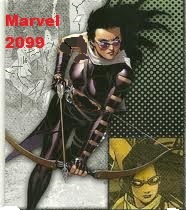 Single
Occupation
Adventurer, Warrior, Agent of New Shield 2099, Tracker
Education
Taught by Light elves.
Origin
Origin
Christina was a human child found lost in the woods in Alfheim. How she got there covered in blood not her own, no one knows. She was found by Faradei, a Light Elf that hales from the land of Alfheim. He along with his people have helped Thor and the Asgardians defend the Nine Realms. Christina was 4 and won't speak do to shock, she only said two words to Faradei "Christina run!" Faradei took her home to his wife, Christina the name given, became their adopted child. They raised her like an elf, like one of their kind.
Place of Birth
Earth
Creators

Christina was a human child found lost in the woods in Alfheim. How she got there covered in blood not her own, no one knows. She was found by Faradei a Light Elf that hales from the land of Alfheim. He along with his people have helped Thor and the Asgardians defend the Nine Realms. Christina was 4 and won't speak do to shock, she only said two words to Faradei "Christina run!" Faradei took her home to his wife, Christina the name given, became their adopted child. They raised her like an elf, like one of their kind.

While she growing up happy and love, she started to notice differences between her and the other children of the Light Elves. For one thing they had pointed ears but there was many other differences they were stronger, faster, got tried less than she did when running and her sight wasn't has sharp nor her hearing. She didn't know she was human nor that she was at the level of an Olympic athlete, she just felt clumsy and weak. Her father Faradei taught her light elf martial arts at this she did great and was match for any elf except her father who was one their greatest fighter, He taught her how to track, stealth, Markswomanship, Swordswomanship, melee combat and taught her to speak all the languages of the nine realms. Her mother taught her light elf magic which was a mix of Druidic and Mysticism, they had the power to communicate with nature itself. She learn to respect nature in all it's forms and to learn from it. She became a great horse rider and even a bird rider, giant roc birds lived in peace with the people. Her uncle Ivory Honeyshot taught her to track. Finally she became 18, her father told her about where she came from and what she was. Also he told her she must learn more about her past to be whole, she must go to the home of the Humans a place called Midgard, also called Earth. But first she had to pass a test to get a holy elven object called Orkneyjar.

She first travel to where the Cat Elves, these Elves are smaller than their brethren and ride winged cats as their steed. She asks a giant Roc bird that lives near the Light Elves to fly her to where the Cat Elves live there she speaks with an elder, who tells her more about Orkneyjar, a magical elven belt that had the power to increased the wears strength, powers, talents and the power of teleportation. In the past, the belt was lost during the slaughter in frozen lands in Alfheim near where the Ice Elves live. After the slaughter by Ano-Athox, the World Tree seeks to cleanse itself of all impurities. It detects the alien World-Eaters and "deletes" them from reality. Instead of being outright destroyed they are imprisoned at the center of the World Tree. Fex thought it would be a new kingdom, but Uthana assessed that now that they were integrated into the World Tree they are more vulnerable than ever. An assessment that turns out to be true when they are confronted with a vengeful Tyr and Balder who for an unknown reason were transported to the center of the Tree as well. The Elves in Alfheim were reborn. Now Christina must find Orkneyjar and also place an enchantment on it, to prevents it from being used by anyone but her or a blood descendant. She is taught the binding spell which is to be used after she has the belt on. She head to the Ice Elves.

Here she ask one of the wing cats, one was a snow cat, they rode to the north. She met the Ice Elves they told her to speak with Mayzen and Elphane. Mayzen and Elphane lead her to one of their palaces that was wiped out by the Ano-Athox warlord Uthana Thoth. The place had been destroyed almost a hundred years ago. Christina enter alone the place was dark to human eyes, she had to use glowing stick, an ice elf stick that work through Bioluminescence, the production and emission of light by a living organisms, in this case fungus. When while unknown to her or anyone in Alfheim, the Ano-Athox using advanced technology a piece of what was left of one their ship, limited inter dimensional travel sent their most Brazen, violent and loyal member of the Ano-Athox, Thela is loyally devoted to her King, Uthana Thoth. She holds a high ranking among her race and she is deadly with a blade. Thela was sent by Fex, the sorcerer of Ano-Athox. He sent Thela to find the magical elven belt Orkneyjar. Christina comes up on Thela has she exits the portal, Thela shout "Human!" and pulls swords to attack Christina. Christina was surprised by the speed of this strange red woman, she quickly shoot arrows at the woman. Thela just manage to block the four shoots the human that smell and dress like an elf shoot. Thela said " Nice shoots for a human but you don't stand a chance you will fall to Ano-Athox, you will fall to me Thela." She leaps into the air and comes down with swords raised where Christina was stand. Christina barely manage to get out of the way, Thela's swords cut through the ice stone that was near Christina, Christina sees Orkneyjar right behind Thela, Christina was getting tired. Christina needed the power of Orkneyjar if she was to live through the day or the next few minutes. Has Thela turn to move to attack Christina again, Christina shoot arrow near Thela head. Thela roar with laughter, "You miss human and now you die!" The arrow started glowing brighter it was cover in glowing fungus, it blinded Thela for a moment that when Christina dove between her legs and got the magic belt. Still blind Thela was reaching to grab and starts to crush Christina with her arms. Christina put Orkneyjar on and spoke the magic words of binding, it was a spell made of three magics, light elf, cat elf and ice elf. New power and heighten senses flow through Christina, she move with a speed she never had before uppercutting Thela off her feet. Blood flows from Thela's mouth, Thela grins like Wolverine and comes fast with swords at Christina. Christina's hands are like burrs has she pulls back shooting arrow after arrow pinning the enrage Thela, who finds she can't move. Just has Christina is about to take the killing shoot, Thela disappears in the same portal she came in. Christina return to Mayzen and Elphane, she later returns home before heading to Earth.

On Earth, Christina moves in the night her magic and elf tracking leads her to a place called Alchemax, she teleports in and just miss the watch camera. She heads an office and Studies the strange magic they call computers. Here she learns about the Asgard Project, her family were Thorites, devotees of the church of Thor, heralding a new day when Thor will return to "smite the frost giants of industry". They were picked to journey through the wormhole to Asgard. The machine failed and all three subjects were lost, Christina never learned her parents names, they were just numbers to this mega-crop. The project was closed down for a new project turning people into nano-engineered gods of Asgard. Christina was sad and left just has Black Cat 2099 teleported in. Wandering the city she met the hero Green Goblin 2099, he ask her to join New Shield 2099, she got a new name Hawkeye 2099.

An Elven magical belt called Orkneyjar: The belt gives HawkEye 2099 the powers of Light Elves who possess superhuman strength, speed, stamina, durability, agility, and reflexes. Additionally, they have a penchant for archery.

Hawkeye 2099 possesses the strength of a normal human female who engages in intensive regular exercise and is able to press lift at least her own body-weight. She is capable of lifting at least 460 lbs with ease. With belt she can lift 30 tons.

Hawkeye 2099 possesses all of the weaknesses of a human female (sleep deprivation, fail on lack of air, food etc) though is able to resist them for far longer than average human levels. Also because of the belt she is vulnerable to iron. Also, being struck by an object made of iron, or even holding an iron object, can cause her great physical pain and injury where as a similarly durable and powerful metal might cause her no discomfort at all. Without the belt she loses her eleven powers.

Retrieved from "https://marvelcomicsfanon.fandom.com/wiki/Christina_(Earth-928.2)?oldid=194634"
Community content is available under CC-BY-SA unless otherwise noted.