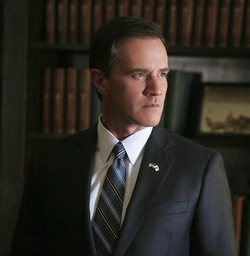 I've spent too much of my life trying to unravel his lies...And yet, he keeps telling them. He always finds someone to believe them.

Senator Christian Ward was born and raised in Massachusetts. He is also the older brother of Thomas and Grant Ward. He was very abusive to his younger siblings, set them both against each other. When they were still children Christian threw his youngest brother Thomas down a well and forced Grant to leave him there rather then rescue him. He however returned and rescued his brother, which began a life long feud between the two. While still a teenager Grant was arrested and imprisoned for burning down their family home. But Agent John Garrett arrived and asked if he knew that his brother Christian was in the house at that time. Christian wanted his brother charged as an adult.

Christian later grew up to become a Republican Senator for his home state. Major Talbot told Lance Hunter that his campaign against S.H.I.E.L.D. was being backed up by a senator who wanted Agent Coulson and his team brought to justice.

Major Talbot met with Senator Ward after Marcus Scarlotti and his fake S.H.I.E.L.D. team tried to kill him at the United Nations Building. Talbot told Senator Ward that he did not believe he was attacked by S.H.I.E.L.D. and that he has not revealed the senator's connection to Grant. However, Christian was not so convinced regarding the former and publicly proposed a multi-national taskforce to hunt down S.H.I.E.L.D.

Christian later returned to his office to find Director Phil Coulson waiting for him. Coulson states that Hydra is the true enemy and reveals that he has Grant in his custody. He offers to hand him off if Christian calls off the manhunt for S.H.I.E.L.D. When Coulson mentioned Grant's talks about "the well", Christian tells him that his brother is a sociopath.

After S.H.I.E.L.D. apprehended the Hydra impostors, as well as expose Julien Beckers, Belgium foreign minister as a Hydra agent, Christian delivered a speech at the U.N., declaring Hydra the true enemy and that the world should not equate S.H.I.E.L.D. to terrorists. In addition, he revealed to the world that his brother was Hydra and promised that he would face justice for his crimes.

Grant did not remain in his brother's custody for long, as he escaped while he was being transferred from the Playground. He eventually abducted his brother when he arrived at his childhood home to see his mistress. Grant had Christian dig up the well where he had him almost kill their brother Thomas all those years ago. Once he uncovered the well, Christian attacked his brother with the shovel and tried to escape, but Grant caught up to him and dragged him back. Grant held his brother over the well, threatening to throw him in unless he apologized for what he did. Senator Ward broke down and apologized for manipulating his brother into almost killing Thomas because he was the only one their mother did not torture. Grant helped his brother to his feet and hugged him, apparently forgiving him. However, once they got back to the house, Grant killed Christian and their parents and staged the scene to look like a murder-suicide committed by his brother.

Retrieved from "https://marvelcomicsfanon.fandom.com/wiki/Christian_Ward_(Earth-1010)?oldid=158894"
Community content is available under CC-BY-SA unless otherwise noted.