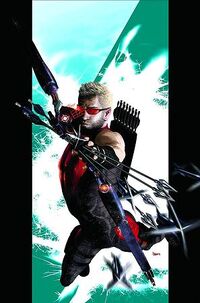 The Heroic Age always intrigued Christian; his favorite hero of the past was Hawkeye. He wanted to be like him and change his world. Chris was born into a wealthy family. His father Daniel Grayson was a board member at the Alchemax Corporation.

Once Daniel retired, Christian assumed his father’s role and became involved with Alchemax. He experienced things from a different view and saw how corrupt this corporation really was. A special division would go out to eliminate mutants and other possible threats.

Chris decided to fight against Alchemax. He would collapse the corporation from within as well as in public as the Hawkeye of 2099. Christian used his funds to create his Hawkeye uniform and he traveled to Japan to learn the art of Ninjitsu. Now as a master archer, Christian assumed the role of Hawkeye to take down Alchemax. He would go out and rescue mutants that were targeted by Alchemax. As himself, Chris would secretly steal and then destroy important corporate files.

Angel flew into an abandoned building to take cover. The truck drove in and the team blocked all the exits. Angel would swoop down and knock out as many as possible. The second time Angel came down she was shot in the wing. The team tried to subdue her, but Angel fought back. She managed to take a few out until another team came in through the roof. Hawkeye saw his chance to enter the building and help her. He climbed the building to the roof and jumped in. Hawkeye landed in the center of both teams next to Angel.

Hawkeye took out six members of the team and he moved Angel to some cover. He climbed up a wall and did a back flip. In midair, he shot three of the soldiers and landed on a fourth. Hawkeye ran back over to Angel and grabbed onto her. Then he shot his grapple gun at the roof and they managed to escape. Over time, Angel and Hawkeye constantly worked together and they started a relationship.

On the day of their wedding, Christian and Angela had to prepare for an assault on Alchemax. Chris' task was to shut down the Alchemax's security so Angel and the X-Men could infiltrate. Their mission was never completed because Chris was caught. A strike team followed Chris and discovered that he was involved with the mutant Angel. They began to torture him until he would reveal the mutants' location. After several hours, Angela came alone to save her fiancé. She entered the building through one of the top floor windows and she encountered resistance. Angela easily dispatched them and she eventually found Chris tied to a chair, covered in blood. The man who had been torturing Chris, picked him up and threw him through the nearby window. Angela jumped after Chris and she barely managed to save his life. She brought him to a hospital and they got married before he knocked out.

Hawkeye and Angel had been recruited by the Exiles to help them fight evil across universes. They had been in several battles with the Exiles and they managed to always return to their universe. Life with the Exiles had begun to take its toll on both Angela and Chris. It was getting harder to visit new realities and witness new kinds of life. Because of this, Hawkeye and Angel decided to quit the team and focus on their home reality. However, the other members on the team persuaded them to stay on for one last mission. They made the wrong decision by accepting.

Their last mission would bring them to Earth-616. It was up to them to defeat the being known as Onslaught. He would manage to create multiple versions of himself that would end up conquering the Earth and dramatically changing the future. The Exiles entered the fray, but they found themselves outmatched. The battle would force Angel and Hawkeye to be left behind.

Following the Onslaught War, Hawkeye and Angel became founders of the New Defenders. Over time Angela became pregnant and the issues with her continuing to be a hero, strained her marriage. When she gave birth to Tim, Christian was away on a mission and didn't arrive until the next day, near-death. Regardless, Angela left Chris and she remained in Defenders Tower with her baby. Chris moved out and stayed in one of his safe houses, where he began to turn to drinking. His personality became darker and he was beginning to rage out of control.

Though he was away from the team, Christian remained part of the Defenders, however he preferred to work on solo missions. Guardian gave him one mission in which he was tasked with protecting an Internationalist speaker. Christian agreed and was undercover as a bodyguard.

Janet Gibson is in the crowd and watches the event, trying to make sense of how the world changed and her part in it. Hawkeye is near the podium, disguised as the bodyguard, concealing his identity with dark sunglasses. Halfway through the Internationalist’s speech, US Agent aims a sniper rifle at her head. Hawkeye sees the glare of the scope and quickly pulls out his bow and fires an arrow at the assassin. The scope of US Agent’s sniper is penetrated causing the shot to miss his target by centimeters.

Hawkeye jumps off the stage and runs toward the rappelling assassin, who begins to chase down the speaker. Hawkeye tackles US Agent to the ground and they begin to fight. Janet removes her clothes to reveal her armor and she heads towards the two fighting. US Agent kicks Hawkeye off him and races to the speaker, but is caught off guard by Huntress. She attempts to use her pheromones on him, but he reads her mind before and slips out from under her. He again continues forward with gun aimed forward and Hawkeye fire an arrow. US Agent back flips and lands on the mid-air Huntress, with the arrow becoming intertwined with the metal in the door of the escape vehicle.

US Agent wraps his hands around Huntress’ throat and prepares to suffocate her. She begins to fly higher in the sky and tries to throw him off; she begins to fade in and out of consciousness. Hawkeye fires one more arrow and it hits his target. The speaker’s other bodyguards continue to fire on the three. Then Huntress uses her pheromones to paralyze US Agent causing him to release his grip and fall below. Hawkeye runs over and has his bow aimed at Huntress, not knowing if she could be trusted. He then drops his guard and talks with her. The two agree to work together, followed by the capture of US Agent.

Back at Hawkeye’s safe house, US Agent’s uniform is removed and he is tied to a chair. Hawkeye recognizes him as Phoenix, though slightly different and he begins to question his disappearance and recent actions. Elliot will not listen to him, cursing his former friend in Russian. Huntress suggests interrogating him through physical force. After a few more failed attempts, Hawkeye submits to Huntress’ will. She throws the first punch and continues when Elliot doesn’t comply. Hawkeye takes over, the punishment finally becomes too much for Elliot and he passes out.

When he comes to, he notes that he has a headache. Elliot looks up, asking why Hawkeye seems ready to punch him again. Then he says, “Your enjoying this aren’t you Chris?” Hawkeye removes his mask and goggles, responding with, “I bet you are too?” Elliot is released and his wounds are cleaned up. He introduces himself to Huntress, who for some reason can’t stop staring at him. Then he informs the two about what happened to him after his corruption by the Phoenix Force.

Elliot departs for a few hours to retrieve his equipment from the Defenders Tower. Chris waits with Janet and begins to get to know her better, whilst drinking. He stops however, as soon as Elliot returns with his uniform and an idea. He is going to stay out of New York and try to find himself once again. Chris announced that he did not wish to return either as his life was falling apart, thus officially removing him from the New Defenders roster. It was agreed that the three companions would remain with each other. The first order of business for this new rag-tag vigilante team was to head to Russia to confront those who brainwashed Elliot.

Master Archer: Due to his Ninjitsu training, Hawkeye is able to fire six arrows faster than the average human can fire six bullets. Hawkeye is a master archer with extraordinarily fast reflexes, exceptional dexterity, and near-perfect aim.

Expert Martial Artist: Christian has mastered all of the 18 disciplines of Ninjitsu. [2]

Hawkeye possesses the strength of a normal human male who engages in intensive regular exercise and is able to press lift at least his own body-weight. He is capable of lifting at least 460 lbs with ease.

Hawkeye possesses all of the weaknesses of a human male (sleep deprivation, fail on lack of air, food etc) though is able to resist them for far longer than average human levels.

Retrieved from "https://marvelcomicsfanon.fandom.com/wiki/Christian_Grayson_(Earth-928)?oldid=158839"
Community content is available under CC-BY-SA unless otherwise noted.