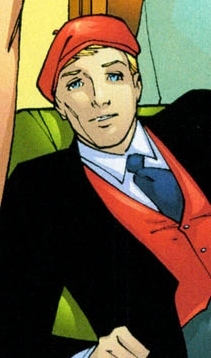 Christian Frost was the second son in the Frost family with his brother Deacon and sisters Emma, Adrienne and Cordelia. It was unknown if his sisters' mental powers would have any effect on him, as each of the other siblings' powers were incapable of affecting one another. Of his family he was closest to Emma.

Christian was the one member of the family who didn't want to have anything to do with the family business. Yet when his father Winston Frost learned Christian and Deacon were gay he threatened to disown them if Christian didn't dump his boyfriend and move back home. Both Deacon and Christian defied his father and left the family, with Christian only remaining in contact with Emma. When Winston retaliated by using his great power and influence to have Christian's boyfriend framed and deported, Christian became deeply depressed and turned to substance abuse.

Emma Frost became very worried for Christian and asked their father to get him help. Winston claimed that he would help Christian but lied and instead sent him to a mental institution. It is unknown what happened to him from then on.

Retrieved from "https://marvelcomicsfanon.fandom.com/wiki/Christian_Frost_(Earth-1010)?oldid=126549"
Community content is available under CC-BY-SA unless otherwise noted.