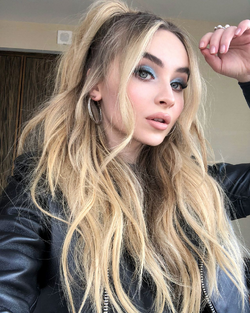 Platinum Blonde
Unusual Features
Her platinum blonde glowing in an iridescent light which happens when she uses her powers or not.
Status
Citizenship

Life is like a gem. Its beauty can be shown underneath its shell of ugliness.

Christanna Joscelyn Locke is the only daughter of Leslie and Billy Ray Locke. Born in Nashville, Tennessee, Christanna had lived a peaceful life until her mother left her father for a rich businessman after discovering that she had been cheating on him. This left animosity towards her and her mother and it would last more than 10 years. During her childhood years, her father would go and perform at different bars for he is an aspiring musician, hoping he would get his big break. Christanna or she's called "Chris" by her loved ones has lived a normal life until when she was 6 years old, her mutant powers began to surface, starting with her platinum blonde hair glowing in iridescent light in which she notices and was left surprised if not frightened.

It wasn't until later when she was in school that she began to create beautiful crystals from her hands, catching a lot of attention from the kids on the playground during recess. When the teachers start to notice, they informed the principal and called her father, telling him about her "special talent". Chris started to feel a bit afraid to show Billy Ray but she started to show him her ability, leaving him surprised by what he had seen. He takes Chris to the hospital and the doctors did a scan on her, revealing to Billy Ray that Chris is a mutant, explaining why she can create crystals out of thin air. Due to Chris being young at the time, Billy Ray decided to pass it off as a special ability until she got older.

When Chris started her freshman year in high school, that's when she began to experience bullying from her peers. She tried her best to ignore the snickering and the gossip from mainly the girls until they began to notice the beautiful glow emitting from Chris's hair and she wasn't even using her powers. Most of the students were mesmerized by her hair and it caused more ire from the girls mostly from the popular ones when they saw their boyfriends interact with Chris. The next day, members of the cheerleading squad targeted Chris and began to hold her down as their captain held out a pair of scissors, trying to cut all of her hair off as they addressed her on how she 'lured' their boyfriends in talking to her. But as they were about to cut her hair, Chris unleashed a crystallized energy blast on her tormentors, bringing shock within the whole student body as well as her future boyfriend, Troy Rivers who has a crush on her. Fearing that everyone had begun to become afraid of her, she left the school immediately.

Chris refused to attend school the next few days due to her powers and Billy Ray came in to see if she was alright and she asks him what was going on with her. Knowing that the time was right, Billy Ray revealed to her that she was a mutant. The doctor told him back when she was 6 and didn't tell her because she was young. When she asked him is she dangerous, and the man shook his head stating that her powers really made people happy, remembering the day she created crystal for the kids to see. That's when Chris was given the opportunity of her life: an invitation was sent to her home and it was from the Xavier School for Gifted Youngsters. She was at first skeptical, but Billy Ray encourages her to go if she wanted to get away from the bullies she was dealing with. Chris eventually gives in and accepts the invitation and in her sophomore year, she transferred to the Xavier Institute.

On her first day, she met other students who were mutants just like her but she kept to herself until she meets Salem Jones-Whistler aka Black Warlock and the two became friends. When she began to show him her crystal powers, he was left amazed and decided to help her develop her powers with the help of Charles Xavier and Cyclops. At the same time, Chris began to develop a love for music thanks to her father being a musician himself and she would perform for her new friends.

Throughout her years, Chris developed her powers, being able to project crystal bolts and construct shields and weaponry while creating jewelry for friends as a hobby. This earned her the name Krystal which she embraced due to her name being close. After she graduated from the Xavier Institute and began to start her life as a musician, performing in different clubs until she began to use her powers for vigilantism after one club she was performing in, was attacked by a group of robbers. Chris was soon scouted by Xavier once again, letting her know about that he was forming the New X-Men and Chris accepts his offer.

Retrieved from "https://marvelcomicsfanon.fandom.com/wiki/Christanna_Locke_(Earth-7090)?oldid=261529"
Community content is available under CC-BY-SA unless otherwise noted.