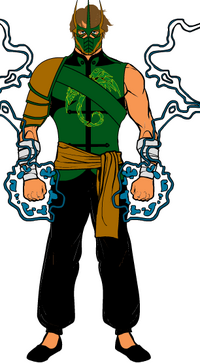 To bring peace to this world, we must do what is necessary to force out the negativity.

Chris Rand is the son of Danny Rand and Greer Grant, Iron Fist and Tigra respectively. Though he was born in the dimension of Earth he spent but a short time here before his father and mother broke off their short romance, leaving to K'un-Lun where Danny was to become an instructor there among new generations of it's populace. Before he would be trained by his father though, Chris often spent much of his time watching the sessions since he was too young to be taken into the training and eventually spent time playing with his new friend, Sera.

Eventually at the age of six Chris was taken under his father's tutelage, but he was also there when his father announced his retiring of the title of Iron Fist, instead seeking to train a new generation for a chance to earn the title. Hearing this though, Chris saw an early ambition to follow in the foot steps of his father and began his rigorous, harsh training in all forms of martial arts that K'un-Lun could offer, being especially trained by his father during times when it wasn't necessary. But during his down times he would often talk with Sera about his training sessions and convinced his father to allow her to watch when she wasn't with the monks studying lore or subjects in K'un-Lun's books and scrolls.

Though he martial arts was the central part of his life, Chris did find time to also begin studying K'un-Lun's history, lore, and legends. When he did reach the age of twelve though things changed when it was discovered the legend of Fongji was to come to pass once again with the appearance of the Phoenix, which was discovered to reside in Sera who revealed it by chance. In the wake of the surprise of the discovery, Sera was put under Danny's teachings alongside many others, including Chris who became her regular sparring partner while many others rejected her due to her being a female. The only thing that came between them though was the prospect of who would be the next Iron Fist.

When that time came with Chris turning fifteen, him, Sera, and a few others were chosen due to showing their exceptional skills over the years. But much to his relief, Sera decided to not go on the path of the Iron Fist since she already held concerns of taming the Phoenix as it was. This gave room for Chris to compete with the rest of the candidates, and to not much surprise coming on top in the following competition before undergoing to the journey to take on Shou-Lao. Though it took him a week, eventually Chris emerged victorious from the temple but with also a new discovery: in the wake of the fight he triggered his latent mutate genes from Tigra and transformed into a were-cat state.

Journey of his Own

In the two years to follow, Chris became a protector and the new Immortal Weapon of K'un-Lun, which often involved helping to keep the peace among the seven cities. He also handled many of their enemies that seemed to plague the mystical dimension but with help from his long time friend Sera, who made use of her chi and Phoenix powers to help in maintaining the peace. Coming to be viewed as a champion of the K'un-Lunan people, Chris seemed to grow into his role with ease and slowly learned to adapt his tiger-like form into his martial arts style while trying to maintain his humanity when he went into it.

However, when K'un-Lun made it's appearance on Earth once more Danny met with familiar faces for a short time outside the city. Once he returned, he decided to charged his son in expanding his experiences on Earth where he was already enrolled into the Avengers Academy alongside Sera, but there was one last role he had to play in watching over Sera in case she lost control. Taking this burden, the two friends came to Los Angeles on opening day where Chris met Claire Parker and almost immediately became smitten with her as she was with him much to the annoyance of Sera.

Chris' strength is greater then a man his age and height, being able to lift from 1 ton even, but with his chi augmentation this goes from 8-20 tons.

Equipment: Occasionally those provided by the Academy
Transportation: His own powers, SHIELD Vehicles
Weapons:

Retrieved from "https://marvelcomicsfanon.fandom.com/wiki/Chris_Rand_(Earth-7194)?oldid=259046"
Community content is available under CC-BY-SA unless otherwise noted.