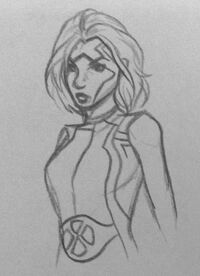 Chloe is one of five daughters of Emma Frost. Emma wasn't prepared to take care of five children without a father for them, so when they were all very young, Emma gave them to a trusted Weapon Plus Director, John Cuckoo for adoption. The girl's biological father is currently unknown.

John experimented on his five daughters, to develop a weapon capable of wiping out every mutant on Earth (which was instructed to him by Nick Fury and the government) by combining their telepathic abilities. Luckily, the X-Men were able to salvage them, but they have already been evolved with their Omega Level Telepathy. They were assigned with Emma's X-Force Group. Emma became the girl's guardian once more due to the girls believing that their "father" (John) betrayed them.

Seemingly those of Celeste Cuckoo (Earth-616).

Retrieved from "https://marvelcomicsfanon.fandom.com/wiki/Chloe_Cuckoo_(Earth-1342)?oldid=158493"
Community content is available under CC-BY-SA unless otherwise noted.