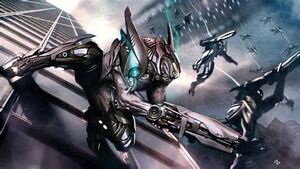 The Chitauri are a powerful, technologically-advanced race of extraterrestrial cyborg-like creatures and they are shapeshifters who have attempted to conquer the Earth. In 3010 they tried to attack the Earth again but failed because of the heroes and villains of that world. Their last ship was cloaked and fitted with a one of a kind Temporal drive. They escaped to the past in 21 century, where their drive burnt out. They were followed back in time by Green Goblin 2099 and Iron Man 2099.

The Chitauri were to kill the scientist who would invent the first fool proof anti-changeling detector.

Retrieved from "https://marvelcomicsfanon.fandom.com/wiki/Chitauri_(Earth-928.2)?oldid=178295"
Community content is available under CC-BY-SA unless otherwise noted.