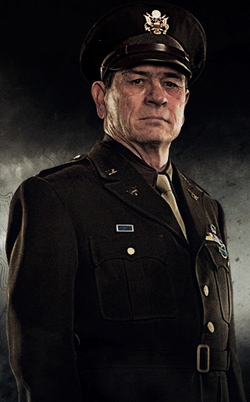 Chester Phillips was a full bird Colonel of the Unites States Army who was the officer in command in the secret military project, Operation: Rebirth. This project was the overseen by the Strategic Scientific Reserve aimed to create a series of "super soldiers" for the U.S. Army to combat the Nazis during World War II.

He was the head of the training camp where the potential candidates were given the opportunity to show their skills. He was against Dr. Esrkine's decision to bring Steven Rogers to the training camp believing him to be too skinny and weak to be a proper candidate, but later agreed to give Rogers the candidate spot.

Colonel Phillips was present when the experiment was successful and witness the murder of Dr. Erskine by a HYDRA spy. Colonel Phillips was later given an assignment from the President of the United States to take the SSR to Europe to take the fight to HYDRA. He took Agent Carter and Howard Stark along as part of his unit, but declined to take the newly transformed but untrained Steven Rogers.

The next time Colonel Phillips met Captain Rogers was when the Colonel was signing letters informing family members of dead soldiers and informed Captain Rogers that his friend Sergeant James Barnes was one of over 200 allied soldiers held prisoner by HYDRA but refused to send a rescue party. Rogers went to save the POWs anyway and Colonel Phillips finally accepted Rogers into his ranks and allowed Rogers to form an elite unit of men to combat HYDRA.

After Rogers captured Arnim Zola, Colonel Phillips successfully interrogated him and located Johann Schmidt's last secret base. He agreed to Rogers' plan to infiltrate the HYDRA base and led the assault going into the base after Rogers. He drove Schimdt's car taking Rogers along to get to Schimt's high-tech plane.

When the war ended, Colonel Phillips presumed to have retired from military service and live the rest of his days in old age.

Retrieved from "https://marvelcomicsfanon.fandom.com/wiki/Chester_Phillips_(Earth-1010)?oldid=129044"
Community content is available under CC-BY-SA unless otherwise noted.