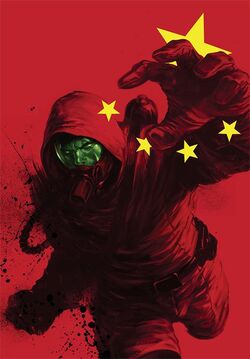 Bald
Skin
Green
Unusual Features
No visible pupils, constantly gives off radiation; iridescent green skin which he can cause to appear normal by lowering his radiation level for short periods.
Status
Citizenship

For years, I've been taking orders from tyrants... The only thing that I regret now, is that my eyes were only opened by this calamitous moment to realize you also are one...

Dr. Chen Lu (born late 1970s) was a highly-respected and somewhat envied nuclear physicist for the People's Republic of China by the early to late 2000s. Achieving a high ranking specialist role due to his gifted mind and hard work, Lu was also known well by the government for his ambitious research on nuclear radioactivity and the theoretical possibility of utilizing and triggering it as a way to grant superhuman powers within humans, an idea which originated from Chen's mind in response both to the birth of public heroism in the United States and the sudden booming of the mutant population across China, something that the government and most of the nation's people had unfortunately discriminated into seeing as due to some of them being involved as freedom fighters, publicly-bastardized as terrorists. Doctor Lu was persevere and optimistic on achieving his work in the name of both science and love for his nation, and as no one in his division was willing to be a test subject, only Lu himself willingly volunteered for his program as it was finally sanctioned and supported by the government, spending months exposing himself to dangerous radioactive materials and substances while his fellow scientists assisted him, performing safety procedures on his gradually-mutating body long enough to keep Lu alive during the extremely long process.

As the program would have met its success, a mutated Lu was further exposed to larger concentrations of specialty radiation which increased his size, causing his body to consistently glow green, which gave Lu superhuman powers. However, on that day, also came an unexpected incident came to Dr. Lu's lab when a group of armed freedom fighters storming inside in order to blow up the building and bury the test subject with it, Lu himself. The implanted explosives were detonated in time, collapsing the laboratory into the ground, killing most of the scientists within the facility as they and Dr. Lu himself were buried by the falling debris, except for a few survivors who were able to escape the attack of the freedom fighters and report the incident to the People's Liberation Army, in which a fleet tanks, helicopters, and soldiers were dispatched at the site to confront any fighter that remains and hopefully find more survivors. Demonstrating his newly acquired power to his superiors, Chen Lu became one of the very first successful super-soldier the Government of China has to offer, with both his government allies and the citizens of China calling Dr. Lu the Radioactive Man.

While his heroism brought him into a life of fame and higher class privilege for almost a year, Lu was starting to realize that he was only being used into service by the government and the army due to his superhuman powers, and his scientific genius was beginning to be taken for granted after more younger and potentially more intelligent scientists began to take his place in his own field. Continuously being treated as a living weapon for the armed forces instead of a respectable scientist by most of his subordinates and superiors alike, Lu began to question his new identity in secret, something that stroke the interest and attention of the mutant telepath Kuan-Yin Xorn, a notorious freedom fighter. As a result, Lu was deceived by the psionic mutant into helping imprisoned mutants into freedom from several internment camps nearby his station, until he was caught by some of his comrades. Lu only became dazed and confused when his fellow soldiers began to aim their rifles at him, and due to the situation triggering a fight-or-flight response in his body, he instinctively bursts deadly radiation beams around the surrounding area, accidentally burning off most of his comrades' skin and half of their flesh as they couldn't stop screaming and firing their weapons out of excruciating pain and agony, much to Lu's guilt and horror after the soldiers died from shock shortly afterwards.

The word of tragic incident had spread almost instantly with the superiors, and fearing that their greatest weapon had gone rogue in favor of their outlaws, the paranoid superiors sent each and every other super-soldier that was also created by the government to team up and take down the completely-baffled and unstable Dr. Lu. As a superhuman squad led by scientist and Abomination-like monster Chang Lam had tracked down the psychologically-vulnerable Lu. Although initially gaining the upper hand in the confrontation, Radioactive Man was still outmatched due to his lack of combat training, other than the fact that he was overwhelmed by his enemies' strength in numbers. Beaten into a pulp by his former allies, Lu's radioactive body had enough of the pain they're trying to inflict on him, causing his body to react in a way that he himself would self-destruct. However, Lu himself was terrified by his own body's reaction, since the detonation would undoubtedly destroy a densely-populated city of the very mainland he was living in his whole life if he doesn't repress his instincts. Begging his situational enemies to let him deal with his ongoing problem otherwise hundreds of thousands of people would die by his self-detonation, his enemies let him wear a hazmat suit to contain the radiation that begins to leak from his body before he ordered one of them to fly him off into the middle of the Pacific, far away from any area of populace, until he finally detonated, presumably dead.

As months have passed, the Radioactive Man was revealed to survive his self-detonation and had gone into hiding after his fallout and unintentional defection from serving the government of China, until Baron Helmut Zemo had located his unconscious and destabilizing body in the shores of Germany. As the grieving Baron had resuscitated and fully reassembled using a miniature nuclear reactor near his hometown, a grateful Radioactive Man eventually joined his secret anti-heroic and, villainous organization which would be later named as the Thunderbolts. No longer serving China's communist-socialist leaders, Lu dedicated his superpowered life into taking down both peaceful and diabolical agencies and organizations (e.g. Hydra, A.I.M., S.H.I.E.L.D.) in the western world that are considered far worse than the very authorities he had been working for in his homeland, be it good or evil in the eyes of the "innocent," in which the principles of their team believes that there are none once they involve themselves with socio-political and economic affairs and inevitably choose the wrong side by stepping over the true innocent ones for their own personal gain and agenda. Within the Thunderbolts, Lu felt gratified as he was being treated as a remarkable scientist and even a trustworthy friend by his teammates, not just a radioactive living weapon that they could use mainly as a last resort. Their goals were so extreme just as their methods were morally questionable, their actions caught the attention of superhero teams including the Avengers, the Defenders, and even the pseudo-jingoistic Thunderbolt Ross, whom they all fought in several encounters, but were also forced to team up with them at a certain time later, in order to battle greater threats.

Returning to China after aiding heroic mutants during the Mutant Ultimatum (circa late 2020s), mutant philosopher and revolutionist Kuan-Yin Xorn was perplexed with mixed emotions to find out that his twin brother Shen was a latent mutant. Filled with overwhelming guilt for his past hateful crimes against other mutants, Shen tried to kill himself until Kuan-Yin barely stopped him in time, convincing that his past shouldn't define who he was that that moment, before he begged and asked for his help in liberating his comrades if he's truly willing to change for the betterment of their people's tomorrow. Due to the redemption of Shen Xorn destructive revolution was ignited against the Government of China after thousands of people, both human and mutant, were inspired and motivated by Shen's redeeming acts to free every captured mutants he was responsible for hunting and imprisoning since the beginning. After hearing of this news break across the country and spread out to his hometown, Lu (now living alone in retirement, frequently meditating inside a temple to stabilize himself) was encouraged by the fearlessness of the masses to do what's best in freeing from the shackles of the authoritative government, prompting him to join the fight for freedom with the growing resistance as the legendary Radioactive Man, continuing his fight for the greater good of his nation's future, at least one last time.

Radiation Physiology: Due to exposure to high levels of radiation, Chen Lu's body was mutated into superhuman levels. As a result, Lu's primary superpower is the ability to absorb and manipulate high levels of radiation for a number of purposes and effects. In the case of other beings that have received powers based from exposure to radiation, Lu can manipulate the radiant energies of those individuals usually for the purposes of temporarily shutting down their powers.

Lu emits nuclear radiation at all times and can only remain in the presence of other individuals for short periods of time if he's wearing his null-radiation body harness. Also, absorbing large quantities of radiation can affect his emotional state.

Retrieved from "https://marvelcomicsfanon.fandom.com/wiki/Chen_Lu_(Earth-61615)?oldid=267315"
Community content is available under CC-BY-SA unless otherwise noted.