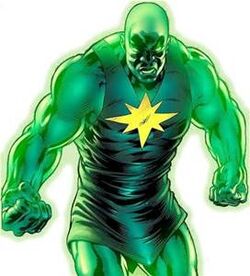 Bald
Skin
Green
Unusual Features
No visible pupils, Constantly gives off radiation; Iridescent green skin which he can cause to appear normal by lowering his radiation level for short periods.
Status
Citizenship

Little is known about Radioactive Man's life before the formation of the Masters of Evil. It can be assumed to be similar to his mainstream counterpart.

Radioactive Man was one of 25 other supervillains to become part of Doctor Doom's Masters of Evil. He was partnered with the Winter Soldier as part of the attack force on the USS S.H.I.E.L.D. Alpha Helicarrier along with Fin Fang Foom, Scorpion, and Bullseye. All 5 were defeated by the Ultimate Alliance.

During the Civil War, Radioactive Man was forced into the Thunderbolts by S.H.I.E.L.D. to fight Captain America's Anti-Registration movement. He was thus apart of the Fold collective when it showed itself during the Prison 42 breakout.

After the Fold's defeat, Radioactive Man was among the villains who were scarred by what transpired months ago to point where they committed suicide.

Chen Lu is an expert on radiation and nuclear physics. He is among the world's foremost authorities on the effects radiation has on human anatomy.

Lu emits nuclear radiation at all times and can only remain in the presence of other individuals for short periods of time if he's wearing his null-radiation body harness. Also, absorbing large quantities of radiation can affect his emotional state.

Retrieved from "https://marvelcomicsfanon.fandom.com/wiki/Chen_Lu_(Earth-6109.2)?oldid=128526"
Community content is available under CC-BY-SA unless otherwise noted.