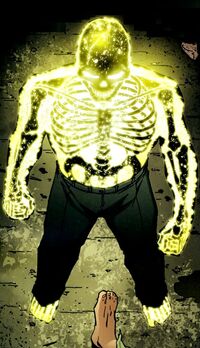 Bald
Skin
Green
Unusual Features
No visible pupils, Constantly gives off radiation; Iridescent green skin which has his visible skeleton inside of it.
Status
Citizenship

Chen Lu is a Mutate with radioactive abilities. In late 2014, he allied himself with Klaw, Juggernaut, Black Knight and Batroc the Leaper to steal Vibranium from Wakanda. Although he and his allies were defeated by Black Panther and the X-Men.

Radiation Absorption & Manipulation: Exposure to high levels of radiation has mutated Chen Lu's body. As a result, Lu's primary superhuman power is the ability to absorb and manipulate high levels of radiation for a number of purposes and effects. In the case of other beings that have received powers based from exposure to radiation, Lu can manipulate the radiant energies of those individuals usually for the purposes of temporarily shutting down their powers. Lu can also purposely lower the levels of radiation within himself. Although he can only do so for short periods of time, he can cause his skin to look normal.

Genius Intelligence: Chen Lu is an expert on radiation and nuclear physics. He is among the world's foremost authorities on the effects radiation has on human anatomy.

Lu emits nuclear radiation at all times and can only remain in the presence of other individuals for short periods of time if he's not wearing his null-radiation body harness. Also, absorbing large quantities of radiation can affect his emotional state.

Retrieved from "https://marvelcomicsfanon.fandom.com/wiki/Chen_Lu_(Earth-1111)?oldid=198940"
Community content is available under CC-BY-SA unless otherwise noted.