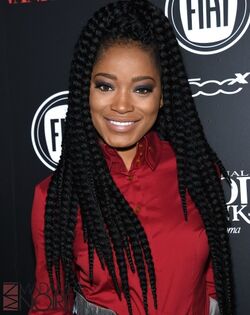 Chay (by Everyone)
Identity

Chayana Joyce Sarabi Washington was born in San Francisco, California on June 8th, 1993 to middle-class parents Lisa Marie Washington and Mawunyo "Rafiki" Kaimenyi one minute after her brother, Ahmir-Jordan aka Starbolt. Like him, Chayana is of African-American, Kenyan, and Ghanaian descent because of her maternal grandparents being African-American and her paternal grandparents being Kenyan and Ghanaian. She gets along with her older twin, but sometimes would often scold him for his short temper at times. Chayana isn't much admirer like A.J. because of their father being a trained police officer, instead she's like most girls: into shopping, gossiping, and boys. Years after her father's passing, Chayana moved to New York City where she went to a downtown Manhattan high school and met her best friend, Zolee Jones. Chayana even became very popular with the boys in her freshman year, although she made some rivals with some of their girlfriends. But the one thing she's focusing on is her family and her clubs, she has signed into.

After finding out that A.J. was struck by the energy bolts of the Zirainian crystal that overloaded the systems in OSCORP, Chayana rushes to the hospital with her mother only to see A.J. alive and okay. This made her a bit worried as the days went by and then one day, she soon discovers that her brother has developed powers, from his stellar bolts to his flying. Chayana thought that he was crazy at first, but she then realizes his vow to help the city and tells him not to get himself killed.

Retrieved from "https://marvelcomicsfanon.fandom.com/wiki/Chayana_Washington_(Earth-2010)?oldid=212542"
Community content is available under CC-BY-SA unless otherwise noted.