If you are looking for his Ultimate Universe Counterpart, See here

If you are looking for his Future Counterpart, See here

"Wait, you're kidding me, right? I mean this is ridiculous, how can I lead a team of mutated spider-people. The Author must be running out of ideas for me." - Chase braking the fourth wall in the first issue

The Heir of the Spider,

Leader of the Web Crawlers,

Guardians of the Galaxy (formerly)

Mutated through injection of Spider-man's powers

Chase Mason Hunter AKA Shadow Spider is the successor of Spider-Man and the leader of the Web Crawlers. Chase is also the genetic template for Arsen, Bloodlust and Indominus, and also an ancestor of Shadow Spider 2099. For a time, he was the host of the Venom symbiote, and when Peter Parker became ill, he became the new Spider-Man until he returned to the role of the Shadow Spider.

Born in Delaware to a English immigrant mother and an American father, Chase was autistic and had ADHD. From the moment he was born, he grew up bullied. When he moved to cape, he fit in well with others and joined the Special Olympics swim team known as The Sussex Riptides where he won many gold medals in 5 years.

When he was 15, the Spider Drones (robotic spiders created by Spider-Man and Mister Fantastic in case Spider-Man died or was placed out of duty and to find perfect genetic matches to wield Spider-Man's powers) sought him out. Once bitten, he was given Spider-Man's powers and abilities with the ability to communicate with spiders. Using his newfound gifts, he formed the Web Crawlers to protect the world from evil, while being helped by Mister Fantastic.

Later on, he joined the Guardians of the Galaxy until he returned home to help the Web Crawlers.

Meeting his Ultimate Self and Defeating the future

During The Death of The Light, he met his Earth-1610 self. They ended up fighting each other until they realized they needed to stop the Earth-616 Chase's future self from destroying the timeline for his selfish needs. In the process, he was depowered.

During Chase's time as a civilian, the Web Crawlers tried everything to return his powers until Eddie Brock, formerly known as Venom thought that if they used the Anti-Venom strain in his blood, they could cure him. Once it was injected into him, Chase began to unintentionally mutate into a variation of the Venom Symbiote.

Once the transformation was completed, he ran and became hostile, leaving his friends shocked and devastated. running off to find ways to expand his bio-mass by consuming his Endo-Sym suit.

During his time as Venom, his friends continued to look for a cure until they found it. the cured was to have the Venom symbiotic be consumed by Chase. Eddie gave the suit to Spiderman to fight him. During thee brutal fight between Chase and Spider-Man, Chase consumed the beaten Spiderman causing venom to absorb the symbol cells in Chase's system.

Once cured, Peter was hospitalized, and had an extremely low chance of survival. Feeling guilty, Chase took up the Mantle of Spider-Man until Peter recovered, whereupon he returned to the role of the Shadow Spider.

Chase is described to be extremely hyperactive, childish and downright sarcastically annoying. Thanks to his autism, he is smart, tactical, and capable of figuring out scientific and other forms of knowledge. But the problem with this is that he makes terrible puns and tons of references. Occasionally, his jokes can make others laugh too.

In The Death of The Light, The Web Crawlers described having Two Versions of Chase was like "Having two Peewee Herman's annoying a group of 65 year old series business executives."

He can be serious when he needs to and has an extreme Emotional Barrier built in his head. Chase is shown to only cry when the people who are the absolute closest to him are dead of hurt to the point where he pities them. If they are not that close, he wouldn't shed a tear or feel bad.

This helps him in battle by being upset about something and quickly over comes it, channeling the emotion in his attacks. Chase is also incapable of comprehending death, describing death as “People turn into sacks of meat, you don't mourn over a cheeseburger because it was once a cow”, showing some sociopathic tendencies.

As Venom, Chase was out of control and mentally unstable, at times he would show signs of his former self but the symbiotic would take control again.

He was shown to know who his are but had an uncontrollable urge to attack or kill them. The once extremely hyperactive, childish and downright sarcastically annoying Chase was a sadistic, mindless killer with no remorse.

At first, there were no direct weakness to Spider Powers, however over the years, weaknesses have been discovered. 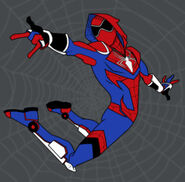 Endo-Sym suit
Add a photo to this gallery
Retrieved from "https://marvelcomicsfanon.fandom.com/wiki/Chase_Hunter_(Earth-616)?oldid=234096"
Community content is available under CC-BY-SA unless otherwise noted.