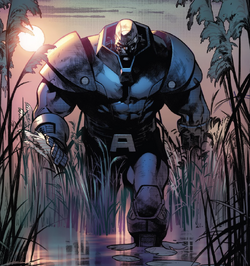 Earth-5509
Base Of Operations
The Nexus
Characteristics
Gender

I am not Apocalypse. I will not be the end of mutantkind... I will be the beginning.

Charles Xavier was a champion for mutant rights, even opening a school for young mutants. Eventually, some of his oldest students were able to master their powers enough to strike off on their own to form a team of mutant heroes called the X-Men, in Xavier's honor.

However, Xavier did not approve. He didn't want them setting a bad example for his son, David, who he believed would develop mutant abilities. He was also hesitant that the public would quickly turn on them, resulting in a mutant/human war. The war he feared would inevitably come, but it was not caused by the X-Men.

It was caused by the arrival of Apocalypse, a psychopath who claimed to be the world's first mutant. Reluctantly, Xavier teamed himself up with the X-Men in an attempt to fight Apocalypse, but he continued to amass power as he recruited his Horsemen, Death, War, Famine, and Pestilence, as well as converting regular humans into slaves using Celestial technology. After the Horsemen killed some of the X-Men, including Cyclops, Storm, and Quicksilver, he was kidnapped by the Horsemen and brought directly to Apocalypse.

It was then that he discovered Apocalypse's plan to transfer his own mind into Xavier's body to gain access to his powers. With no help from the X-Men, Apocalypse's plan was successful, but Xavier's mind was not completely wiped away. He was forced to watch as Apocalypse slaughtered millions of humans, including his own wife and son.

This horror convinced Xavier to fight back, eventually managing to completely overtake Apocalypse's body, erasing his mind. With no other foreseeable course of action, Xavier pretended to be Apocalypse and attempted to utilize his plan to legitimately bring world peace.

But humanity did not want Apocalypse's peace. Several of humanity's heroes, including Iron Man, Hulk, Captain Marvel, Daredevil, Black Bolt, and the remaining members of the Fantastic Four, Human Torch and the Thing, all came together to fight against his forces. Xavier was unsure of how to proceed, and was unable to prevent his Horsemen from running off into battle. One by one, the Horsemen fell, and the surviving Avengers came face to face with Apocalypse.

He attempted to fight them off, but a combined blast from the powers of Iron Man, Captain Marvel, Black Bolt, and the Human Torch ended up damaging his armor and slowly melting his skin. However, moments before his death he was plucked out of his reality by the Silver Sentry and placed onto Team X.

Xavier was instantly met with resistance from some of his fellow teammates, particularly Cyclops and Beast, who had each been slighted by their reality's version of Apocalypse. He was eventually able to express to them that he was truly Xavier, but still maintained a rocky relationship with his new teammates. Despite never being on board with the concept of the X-Men, he did view joining Team X as an excuse to make up for his past sins.

Over the course of multiple missions, Xavier was slowly able to gain the trust of his teammates. He knelt next to Beast as he lay dying, and the two shared final words with each other, coming to an understanding, and Charles bidding Beast goodbye. It wouldn't be long until Team X found themselves on a mission in an alternate reality's version of Attilan.

Their mission was to abduct Black Bolt and Medusa's newborn baby to save him from the incoming destruction of Attilan, and leave him with suitable parents. However, they were naturally met with resistance from the Inhuman Royal Family. The team was separated, and Apocalypse found himself standing alongside Cyclops, the only team member who was yet to trust him.

Apocalypse was eventually able to deduce that the reason behind Attilan's destruction was Black Bolt's own power, so Apocalypse told Cyclops to grab the baby and go, and that he would hold off Black Bolt. Cyclops was hesitant to abandon him, but eventually agreed to trust him and the two split up. Apocalypse fought off Black Bolt for as long as he could, but ended up having his Celestial Armor destroyed in the battle. But he was able to keep him distracted long enough for Cyclops and the Team to escape, but ultimately died in the destruction of Attilan after Black Bolt loses control over his powers.

Retrieved from "https://marvelcomicsfanon.fandom.com/wiki/Charles_Xavier_(Earth-5509)?oldid=252387"
Community content is available under CC-BY-SA unless otherwise noted.