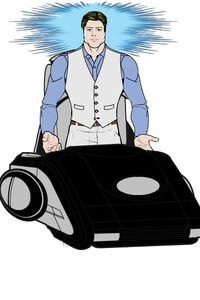 Charles is the son of Brian and Sharon Xavier. His parents met while both were attending Oxford University. They eventually fell in love and got married. To Charles's future anguish, Sharon had already had a child in a previous relationship with a teenage sweetheart, Kurt Marko. While Sharon was pregnant, Kurt, not knowing about the pregnancy, slowly became more violent and mean towards her. To Sharon's dismay, she had to leave Kurt and raise the baby on her own. While at Oxford, Sharon had her parents take care of her son Cain Marko. Sharon had come from a rich family from Westchester County, New York. His father on the other hand was from an aristocratic family from Oxfordshire, England. Once married and completing school at Oxford, his parents decided to move back to Sharon's family mansion in Westchester County, since her parents decided to move out to travel the world. Brian then adopted Cain Marko as his own son. Cain was five years older than Charles.

While growing up Charles received many values from both of his parents such as acceptance, pacifism, counsel, etc. His parents both became world renowned geneticists and biochemists. Charles would not learn the true nature of their careers until years later. He had a happy childhood with his parents, but, since they were very busy, there were period of time when he wouldn't see his parents for a couple weeks at a time. Cain was a very troubled child even though Sharon and Brian did their best to raise him right. Cain became very jealous of Charles's scholastic and athletic achievements, so he would occasionally abuse and bully Charles.

When Charles' powers began emerging, he was 13 yrs old. Around that time, Cain left home for a reason that he wouldn't learn until years later. He went on to go to Oxford like both of his parents. While he was there, he met two of his future lifelong friends Moira Kinross and Erik Lehnsherr (Earth-515). Moira became the love of his life, while Erik became the best friend he had ever had. The three of them became like the three musketeers and did everything together. He eventually learned that they were both mutants as well. After completing school and all getting degrees in genetics, they decided they would create a sanctuary for mutantkind. Eventually, Magneto became more radical and wanted to enslave all of homo-sapiens. In turn, Charles and Moira ran away to start new sanctuaries for mankind.

Charles then went home after not hearing from his parents for a few months, while Moira went back to Scotland to visit her family. When Charles arrived at home, he found the inside a wreck and his parents lying mangled and bloody on the floor. He found that his father was still barely breathing. His father said, "Use your mind... read mine..." Charles didn't realize that they knew about his power, but he didn't have time to ponder it. He then looked into his father's mind, and started to see flashing random images before it went dark. His father had died. Charles then arranged a funeral for his parents. He inherited everything from his parents. He then began renovating his home. One image from his father was a door leading to a room in his house that he had never gone into before. He found it was full of shelves with papers and files. He found that his parents had been researching human mutations, and he found files on various people who were known mutants that his parents had been doing tests with. He discovered that these tests and trials must have been the reason for them leaving for weeks at a time. Charles then decided to continue their legacy, while making his family's mansion into a sanctuary for mutantkind. He then began to form the X-Men.

Charles possesses the normal human strength of a man of his age, height and build who engages in moderate regular exercise.

Charles is the Nexus version of Charles Xavier (Earth-616)

Retrieved from "https://marvelcomicsfanon.fandom.com/wiki/Charles_Xavier_(Earth-515)?oldid=158041"
Community content is available under CC-BY-SA unless otherwise noted.