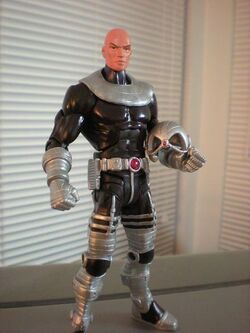 Magneto has great potential. Most see me as saying that in terms of powers, which I do. But I imply as a leader. He is capable of shaping opinions almost as easily as magnetism. I could not be prouder to be his partner.

Charles Xavier had always had a good life. His telepathic powers first manifested in the womb, when he killed his evil sister. After this, they would not be seen for some time. He was raised well, though his father died when he was young. His mother never remarried, and Charles spent most of his time alone, usually studying or doing something similar.

Soon Charles' telepathic powers developed, and he began reading the minds of the teachers at school. This gave him even better grades than before, and soon he was legally classified a genius. This earned him the nickname "Professor." He tried very hard to hide his power, which was sometimes easy, sometimes hard. But he managed to keep it a secret. One side effect though is that his powers rendered him bald.

Soon the Professor decided to join the Army. He had a great term, sometimes using his telepathy to render soldiers comatose rather than killing them. He fought valiantly alongside soldiers such as Cain Marko and Frank Castle. Soon his best friend Cain deserted the army under fire, and was never seen again. Charles became depressed, and he himself deserted the army under fire. Soon he fled to Africa, where he fought an entity called the Shadow King who was possessing a man named Erik Lehnsherr. He and Erik grew to be great friends, especially after Erik revealed he had the power to manipulate magnetism and metal. They fought against menaces such as HYDRA during this time, but after turning on him and stealing some gold bricks, the Professor tried to stop him, but Magneto found a bullet in the road and lodged it in the Professor's spine, paralyzing him from the waist down.

Soon, Charles moved to Westchester, New York, and was able to buy his old mansion back. He began refining parts of it into a training facility. He began training mutants and helping them with their powers. Soon he decided that was not enough, that the world needed people who protected mutants. So he began bringing his students together. First he picked up the laser-eyed Scott Summers, codename Cyclops. Then he expanded his search, finding young telepathic pupil Jean Grey, codename Marvel Girl, the winged Warren Worthington III, codename the Angel, the ape-like Hank McCoy, codename Beast, and the frigid Bobby Drake, codename the Iceman. He called his students the X-Men. These students were trained hard, and for a long time, but they were needed in battle, to fight, ironically enough, Erik Lehnsherr, now under the codename of Magneto.

Magneto was defeated, but he escaped. He realized, to combat the X-Men effectively, he'd need his own team. So he recruited his children Quicksilver and the Scarlet Witch, the lowlife Toad, and the hobo Mastermind. They set off to combat the X-Men, and they were doing an effective job. But when Cyclops tried to shoot Quicksilver, he missed, and that had lethal consequences, especially for an explosives factory. Cyclops and Jean Grey were killed, along with Mastermind and Quicksilver. After this, Magneto saw the light, and the Professor suggested a merger, which he accepted, bringing Toad with him. Shortly after, Magneto created armor for Charles' legs that allowed him to walk, and he took the new codename "Cerebro."

Soon after, the X-Men were trapped on Krakoa. Magneto and Cerebro formed a team to save them that consisted of Darwin, Petra, Rusty Collins, and Spoor. They were all seemingly killed. A second, much larger team was formed to save them, which included Banshee, Blob, Storm, Wolverine, Gambit, Cannonball, Senyaka, Polaris, Fabien Cortez, Skids, Chrome, and Barnacle. They were able to free the X-Men, and most of them stayed afterwards. But the original X-Men left the team, seemingly permanently. But the original 3 X-Men came back and wanted to form a new X-team called X-Factor. Cerebro told them they would need these, presenting clones of Cyclops and Jean Grey. Everyone was completely against it, but he told them he would shut them down if they did not take them. Secretly, he had installed spy gear to watch their activities, but no one told the clones that they were not the originals they thought they were.

Telepathy: Cerebro is arguably the most powerful telepath the world has ever seen. He can read and alter minds to his whim, within a 250 mile radius. The Cerebro helmet allows him to triple this range. He can telepathically stun foes as well.

Astral Projection: Charles can send his consciousness to the astral plane, where he can battle other psyches and create constructs of ectoplasm.

Telekinesis: Cerebro has very minor telekinesis, allowing him to lift objects with his mind, but not create constructs.

Advanced Longevity: Cerebro has an extended lifespan allowing him to live 100 years.

Genius: Charles is an expert on mutation and genetics, and is knowledgeable in all other areas.

Martial Artist: Charles Xavier has trained in many forms of martial arts.

Without the use of his artificial legs, Charles is paralyzed from the waist down.

Equipment: Artificial Legs: Charles utilizes artificial legs gifted to him by Magneto. They allow him to walk, and utilize StarkTech boot jet technology allowing him to fly.
Transportation: None known.
Weapons: None known.

Retrieved from "https://marvelcomicsfanon.fandom.com/wiki/Charles_Xavier_(Earth-5)?oldid=244890"
Community content is available under CC-BY-SA unless otherwise noted.