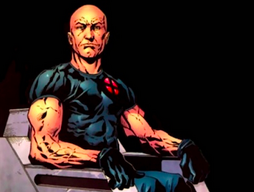 You're a mutant, Emma, but that doesn't make you a freak. It makes you special.

Not much is known about the early years of Charles Xavier. He built the Xavier Institute for Gifted Youngsters to train mutant misfits like he was.

Charles participated in the Genoshan War, where his twin sister, Cassandra Nova, helped Apocalypse reign over Genosha. Emma Frost was one of the victims of the war, and Charles saw her potential as a mutant. He later adopted her.

After having success with his Xavier's School for Gifted Youngsters, Xavier would form the X-Men recruiting multiple mutants to his group, he even set up a special group of humans, the best one out of all of them would become the first human member of the X-Men. Xavier would then team up with Avengers and a few other heroes teams in the Great War.

Retrieved from "https://marvelcomicsfanon.fandom.com/wiki/Charles_Xavier_(Earth-1210)?oldid=164559"
Community content is available under CC-BY-SA unless otherwise noted.