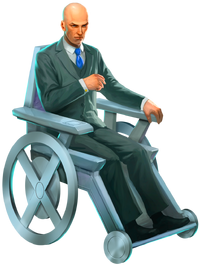 I am Charles Xavier, and this is my X-Men

Charles was the son of the wealthy Brian Xavier and Sharon Xavier and lived in a mansion that belonged to his ancestors since the Colonization period.

Xavier's powers manifested as a teenager, over the years Xavier learned to control his powers. Charles would later graduate high school and go on to Oxford University and study there. In 1988, Xavier graduated with a degree in Genetics, Biophysics, Psychology, Anthropology and Psychiatry.

In 1989, Charles met and befriended fellow mutant Erik Luu. The two grew closer over their shared dream of a place for mutantkind in society. The two would go on and discover the Savage Lands, a forgotten jungle in the Indian Ocean. In this lost tropical world, Xavier and Magneto built a home for the growing mutant population.

In 1997, the two and the other mutants lived in peace at the Savage Lands until Erik began growing egotistical and his hatred for the humans increased, Erik believed that mutants were indeed the next step in human evolution and humans were neanderthals that needed to be enslaved. Charles would then notice that at times Erik would disappear from the Savage Lands, he followed him and eventually ended up discovering that Erik and other mutants would be attacking human cities. Charles and Erik would engage in an argument about the future for mutants, which then lead to a fight that ended in Erik crippling Charles with a metal spear.

Charles managed to escape and returned to the United States where he established his old mansion home as a school and place for young mutants to learn to control their powers. There, he would go on to enroll students Scott Summers, Jean Grey, Ororo Munroe, Pietro Luu (Erik's illegitimate son) and Bobby Drake a few decades later.

In 2014, after the Mole Man Invasion and the Attack of Ultron Charles realizing that Erik would become even more dangerous and would no longer feel the need to hide in the shadows, he'd continue to try and enslave humanity so in turn Charles decided to form his own team compromised of his mutant students to combat Erik and protect human and mutantkind alike. Charles used the Xavier Institute to train his X-Men to use their powers for the benefit of both man and mutantkind. The initially shy and aloof Scott Summers, whose eyes could emit concussive blasts, was the boy scout-like X-Men field leader, Telepathic/telekinetic Jean Grey was outgoing and foxy, but also a very responsible young woman and became the unofficial second-in-command behind Cyclops.

Charles would expand the team to include members, Wolverine, Storm, Iceman and Quicksilver.

On a seemingly quiet day at the X-Mansion, the X-Men and other Mutants were enjoying a peaceful day and were involved in bonding activities, like playing baseball and hosting a barbecue. That night, Wolverine would suffer a nightmare that would trigger a memory of the Weapon X project, Logan would go to confide Professor Xavier about this and would ask for help in recovering his memories. Xavier reached inside what was left of Logan's shattered memories, Xavier learned of the Weapon X project located deep in the mountains of Alps. Xavier would also order the X-Men to accompany Logan.

The X-Men returned to the X-Mansion revealing the news to Xavier. This battle would go on to leave the X-Men shaken and changed after this.

Later on Galactus would attack Manhattan, this would cause widespread panic at the Xavier Mansion. Xavier would calm his students and tell them everything would be alright, Xavier had faith in his students and the other heroes.

When the X-Men returned, Jean and Scott were devastated but wouldn't explain why. Ororo would go on to explain that since they averted the future that Cable comes from, he faded from existence. Xavier decided to give the X-Men their space as they had just witnessed traumatic events.

Charles Xavier was a mutant who possessed potent psionic abilities that could manifest in a variety of ways. Some of these abilities include:

Strength of a normal man his age and size who engages in moderate regular exercise, mostly in his upper body

Paraplegic: Professor Xavier has been normally unable to walk due to spinal damage, originally suffered from a metal spear through his back by Magneto.